Although I fully understand the reality of life in other planets, galaxies and parallel universes, I didn’t readily bite into these channeled messages purportedly coming from the so-called Galactic Federation of Light or the StarTrek sounding Ashtar Command adventures. But having been an avid follower of Ben Fulford and the patriotic WhiteHats, I could sense that something big is going to happen very, very soon. And I don’t think we need to wait for months or years. I can feel it could be happening within a week.

And as I was scouring the web for more resignations, I was able to come across this very compelling article…

Message from the GFoL: Mass Arrests This Week 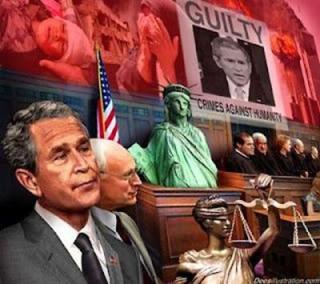 You want answers. Please quite yourself for a moment. There will be certain events unfolding within the next few days that will alter the course of your lives on Earth. The mass arrests we have spoken of will begin in earnest, and we would suggest you prepare yourselves for this. We see some disruptions to some services, but not many as these beings are taken into custody, and we would like all of you who have informed yourselves of the importance of these events to share this information far and wide and also educate others as to their relevance.

Be on the lookout for the initiation of these arrests that shall begin very soon. Our Earth allies are in place and are prepared to undertake this massive endeavor. Large numbers of men and even some women will be taken out of your society and into custody where they can no longer interfere with your lives and the proceedings of the events set to unfold in your world.

Like I said, I’m not into these channeling stuffs. In fact I’m very careful in not falling into the trap of unconsciously spreading disinformation, such that this is probably the second time only that we published similarly compelling messages; the first being that which was published through exopolitic.org.

Whether the arrests happen today or the next full moon, who can refuse to love scenes like these…

We’ve never been your people, aren’t we?

Seriously, we should know by now what is happening in Greece in recent days:

Of course, Greece, Spain and Portugal have no other recourse but to declare a default. Why not? Ireland had done it already with a counterpunch that requires the bankers to prove where the hell did the debt came from in the first place?

Greece is poised to take it to the next level, in fact…

Honestly, I don’t really understand Greeko, but I’m pretty sure that guy at the center is not happy where things are going. In fact, here’s the Google trying-hard translation… 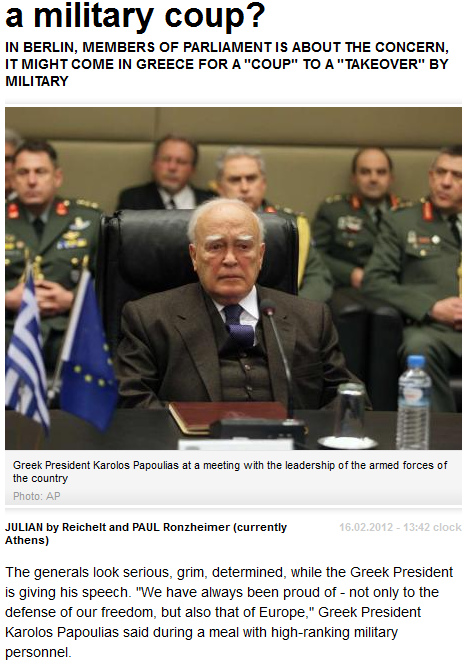 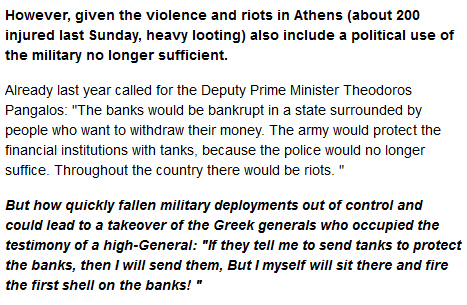 Definitely, a good and wise choice for a target!

At the time of drafting this article there’s still nothing on the news… except the following:

Arrests Made in Italy After Discovery of $6 Trillion in Fake U.S. Bonds

(CNN) — Italian authorities on Friday arrested eight people in possession of an estimated $6 trillion in counterfeit U.S. Treasury bonds, according to Italian paramilitary police and an Italian news agency.

The discovery of the fake bonds — made to look as if they were printed by the U.S. Federal Reserve in 1934 — came about as part of an investigation into a local mafia association.

The arrest order for the alleged criminals was issued by a preliminary investigative judge in the southern Italian city of Potenza, police noted.

Italian authorities, working with their Swiss counterparts, learned about the counterfeit bonds by way of eavesdropping on wiretapped phones, police said.

The total of $6 trillion is more than twice the Italy’s national debt.

I wonder when will they arrest the Godfather of all Pedophiles, the Holy Pope Malevolent XVI…

Other than those, they fry on this one, too…

Acknowledgement: The photos in this article are taken from Facebook friends a long time ago. If this is yours, a million thanks to you.

2 thoughts on “Massive Arrests is Next… Week?”