Update, 3/19/2012: More data gathered including analysis from Political VelCraft and other military sources that indeed the “Big E” is heading for the Strait of Hormuz… for the “Big Ending” ???

The same concerned citizen that alerted us on the new Anonymous “call to arms” video also gave us link to an Anon video warning us that a possible false flag operation that would provide a pretext to attack Iran, in order to lure China and Russia into a nuclear exchange, could occur using specifically the soon-to-be-decommissioned USS Enterprise.

There are a lot of empirical data available across the web and published books written by several independent writers that would educate us how effective a false flag operation really is in selling such absurd idea as going to war against anybody just for the lulz of it. The most notable false flag operations caused the following:

Silverstein profited from the demolition, the military industrial complex sold their wares at the price of their choosing, and the church achieved its goal of sowing fear into the minds of its subjects as it had been doing since its inception, i.e. terror in lieu of the Cold War and before it, the obsolete concept called Hell.

Therefore, just like the WTC Towers scheduled for demolition, the soon-to-be-decommissioned USS Enterprise will be used for a false flag operation aimed at convincing the ignoramus to join another “Coalition of the Willing” to attack a beautiful country like Iran.

“So we have naval officers in the past and present relieved of duty. We have an aging aircraft carrier with 8 nuclear reactors to be retired before her due date. We have many a chicken hawk wanting war with Iran. Oh, did I mention, we also now have the USS Enterprise (CVN-65) on her final deployment as of March 11 2012 and she is headed to the U.S. Navy’s 5th and 6th Fleet areas of operation. The Fifth Fleet of the United States Navy is responsible for naval forces in the Persian Gulf, Red Sea, Arabian Sea, and coast off East Africa as far south as Kenya. Since 2005, the Sixth Fleet ships have increasingly been operating around Africa, particularly in the Gulf of Guinea. See here for 5th and 6th fleet components – http://navysite.de/navy/fleet.htm

So .. what better way to save millions of dollars in the deconstruction of an aging NuclearAircraft Carrier and her 8 reactors than to sacrifice her to the War Gods.

With that I give you USS Enterprise False Flag!!“ 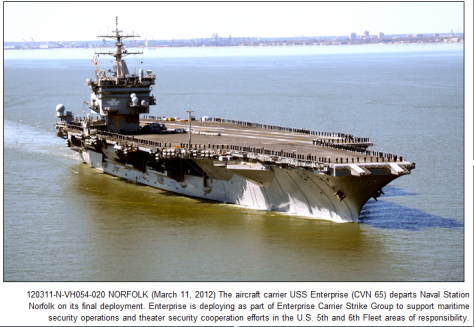 The high probability of using USS Enterprise is its popularity among the rest of the fleet, especially here in Asia where it was assigned, and for the rest of the world due to the StarTrek series.

Whatever happens to the USS Enterprise or any other US targets from hereon cannot be attributed to the Iranians, and both Mossad and CIA know that… 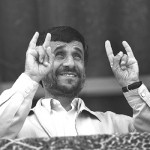 But the actors have read the script already…

One must also understand that Iranian President Mahmoud Ahmadinejad is a Dark Cabalist just like Bush, Clinton, Castro…

Note: We will expand this page with more information. There are a lot of reports coming in than we can possibly relay to all of you. Just sit tight, and be prepared.

Don’t just sit there. We can avoid another mayhem just by sharing this article. We are all in this together. You can even modify this article to make it your own.