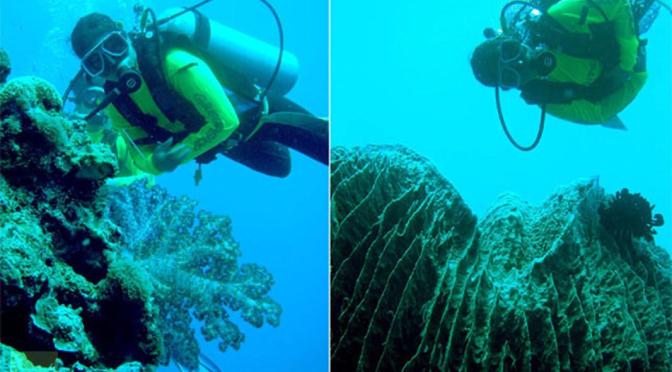 Update 5:52 PM 26jan2013: The Philippines is said to be clueless as to why a US minesweeper is in the area of a world heritage site we love to call as Tubbataha Reef. USS Guardian is causing about 1,000 square meters of damage and counting.

The irresponsible parties are now considering three options on how to remove the stranded minesweeper: crane, towing and dismemberment. Of course, the use of crane is more appropriate considering the additional damage towing may imposed on the natural preserve.

The use of crane could also help facilitate the recovery of any sunken treasures in the area. And that’s what exactly the option they are prioritizing.

They are also waiting for USNS Salvor, a very powerful Safeguard salvage ship, to arrive at the vicinity. Even without the crane, this rescue and salvage ship can very well do the job as well…

In addition to the standard legs of beach gear, Salvor carries 4 spring buoys. The spring buoys are carried beneath the port and starboard bridge wings and are painted bright orange.[6] Each spring buoy weighs approximately 3,100 pounds (1,400 kg), is 10 feet (3.0 m) long and 6 feet (1.8 m) in diameter, provides a net buoyancy of 7½ tons, and can withstand 125 tons of pull-through force.[5] The spring buoys are used with beach gear legs rigged from a stranded vessel when deep water is found seaward of the stranded vessel. more »

So far, the insidious plan is working. Even the noisy Department of Justice is unusually silent about the whole issue. That’s the clue right there, that this administration know exactly what’s really going on but they’re not ready to tell you about it. 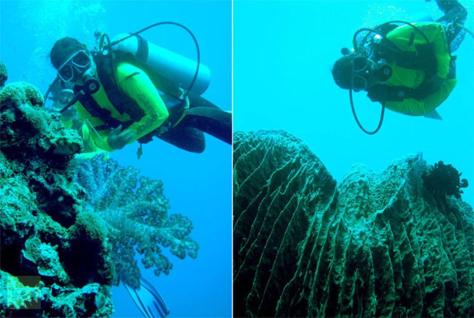 That’s Tubbataha Reef in all its splendor. Sadly, just recently, some rogue elements of the US Navy decided to ram their ship into our underwater paradise without the slightest provocation from anybody.

They can drive drones remotely, but they can’t steer a sophisticated warship without smashing a highly protected marine sanctuary, a world heritage site for that matter, in spite of repeated radio warnings from park rangers. If this is not deliberate then, are they all drunk on board?

Please read below to see how these assholes showed their arrogance on the way to the event. 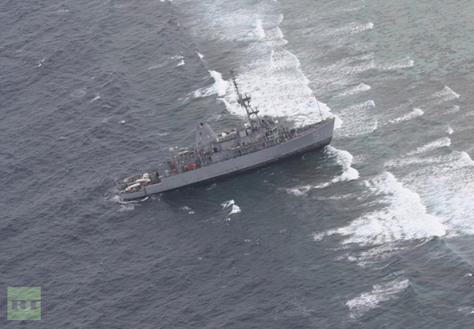 Only a few days ago, Germany demanded repatriation of their gold deposit at Federal Reserve NY. Other countries are also doing the same recovery measures after falling victims to Tungsten Bullion plated with thin coats of the real deal.

Early last year, as the bankers were jumping off the sinking ship in droves, intel reports received through Ben Fulford talked about raids of old buildings and caves in the area of Palawan, in the guise of a joint military exercise, Balikatan 2012.

They’ve done this same monstrosity to my country in 2006. Now they are back again.

If more of their ships or submarine will come, then, it’s obvious that this is a deliberate action to create a need for another recovery effort beyond the removal of their grounded USS Guardian.

This week’s Fulford Update also mentioned about the real intent of the occupation forces in Mali, i.e. to make sure that her annual gold production would be allocated for the repatriation of the German gold. The second purpose is to divert attention from a last ditch land grab of a potentially lucrative post-Cabal Saharan desert.

Whatever the case maybe, the damage to our crowning jewel is said to have irrecoverable consequence.

The action was deliberate showing nothing but desperation out of an imminent defeat.

The Philippine government has fined the US Navy for unlawfully entering and damaging a World-Heritage listed coral reef aboard the USS Guardian, even after receiving radio warnings by park rangers to avoid the reef.

Penalties of unauthorized entry to the Tubbataha Reef are severe, and include a maximum penalty of one-year imprisonment and a fine of 300,000 pesos (about $7,300). The Philippine government has decided to fine the US Navy, but will not be sending anyone to prison, according to information obtained by the Agence France-Presse.

Ever since the USS Guardian damaged the protected reef on Jan. 17, Philippines have expressed growing anger over the perceived carelessness of the US. A government-led board that manages the reef took several days to assess the destruction to its reef and resources and decide on the penalty.

Jose Lorenzo Tan, a member of the board, refused to discuss the amount of the fine the US Navy will be forced to pay, but confirmed that there would be no jail time.

Angelique Songco, head of the Philippine government’s Protected Area Management Board, told the Huffington Post that the government typically imposes fines of about $300 per square meter of damaged coral. The World Wide Fund for Nature Philippines estimates that at least 10 meters (11 yards) of the 68-meter (74-yard) reef have been damaged.

On Jan. 17, the USS Guardian, an American minesweeper, went aground the coral reef, even after receiving radio complaints from park rangers assigned to warn oncoming ships of the World Heritage-listed site’s location. After park rangers contacted the USS Guardian, the ship captain told them to direct their complaints to the US embassy instead. The US Navy then continued along their route, going aground against the Tubbataha Reef and getting stuck.

The US Navy released a statement after the incident, blaming the slip-up on bad weather, wind and waves, and promising that some of its personnel will remain aboard the USS Guardian to help free the ship from the coral it was stuck on and to minimize the environmental damage.

The US has long planned to increase its military presence in the Philippines in order to counter China’s growing influence in the region. Last month, the Obama administration began to significantly increase its number of troops, aircraft and ships that rotate through the island nation. The US has also provided the country with financial assistance and signed a five-year joint US-Philippine military exercise plan. The US Navy also visits the Philippine ports to refuel its ship and allow its forces to rest and relax. But while the administration has tried to keep up good relations with the Philippines and gain a strong presence in the region, its mistake on the World Heritage-listed coral reef upset many locals and may cause a setback.

The USS Guardian is now grounded on the south atoll of the Tubbatha Reef. The Phillipine Coast Guard will attempt to remove the ship from its dangerously close location to the protected reef and will continue to assess the environmental damage.

Thanks to the following for continuing to support this humble endeavor: