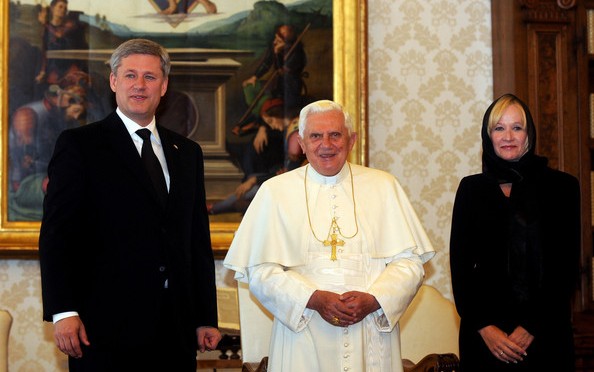 Even those who have followed the events and the real cause leading to the resignation of the CEO of the Vatican, Inc., are experiencing disbelief that such a thing would actually happen.

We are very lucky to have, in some measure, prepared for more monumental disclosures and resignation in the coming weeks. But for those who are still in denial and the uninformed, the shockwaves and aftereffects of upcoming events might be too much to handle, such that the only recourse would be to refuse its acceptance and succumb to a self-impose reclusion.

Be that as it may, even the once formidable system itself is cracking. It is disintegrating slowly but surely. No amount of patchwork could prevent the onslaught of Truth. After the Pope, the British Monarchy is next.

Capitalizing on the distraction caused by the latest crisis at the Vatican, Canada`s state-managed “Truth and Reconciliation Commission” (TRC) sneaked into the media today its astounding admission that thousands of children did in fact die in church-run Indian residential schools across Canada.

European Holocaust Deniers would be proud of Canada’s TRC.

To have the gall to even suggest such a ludicrously low death rate – when every government record and all our posted evidence shows that as early as the first year of the western residential schools, the death rate averaged between 30% and 50% – shows how deep the rot of deceit extends into the stage-managed TRC.

This Big Lie strategy by the church and state-established TRC has worked up until now, but their deception has worn thin. Like the Vatican, the Canadian government must feel especially desperate to risk announcing such a proven lie and exposing such an obvious coverup.

Regardless, all the TRC has done today is to prove that their work constitutes a criminal conspiracy to subvert and obstruct justice. Their duplicity has indicted their government and church sponsors before the law and the world.

This latest act of official deception will figure as more evidence of deliberate cover-up in the docket of our upcoming Common Law Court case against Canada and its Catholic and Protestant churches. In the months ahead, it won’t just be former Popes who go to trial for conspiracy and child murder.

Fiddling while Rome Burns? The Pope Hides from Sight while Italian Church and State Feign Normalcy

The biggest crisis to hit Catholicism since the Reformation keeps spiraling out of control for the Vatican.

Domestic commentators describe events in Rome as constituting the worst political problem for an Italian government in decades, as President Napolitano is being pressured by the Vatican and his Lateran Treaty obligations to aid Pope Benedict evade and obstruct justice.

The entire matter of the Pope’s situation and Italian liability for criminal behavior was apparently high on the agenda of Napolitano’s recent discussions with US President Barack Obama in Washington, DC.

Meanwhile, keeping an accused Joseph Ratzinger under their protection in defiance of international law, the Vatican’s Secretariat of State under Cardinal Bertone is delaying their response to a Diplomatic communique from a European government notifying Rome of impending legal action against Ratzinger.

According to a source who is a liaison with the said government, no official reply has been issued by Bertone’s office to the February 4 communique, nor is the Secretariat even engaged in back-channel communications on the matter.

“They are pretending the Diplomatic Note never arrived, and that business is normal leading up to their Conclave to choose their next pope. They must maintain an appearance of stability right now, we are assuming” said the liaison source.

Meanwhile, the church-dominated Italian media has launched a vilifying and uninformed assault on the ITCCS and Kevin Annett without having contacted or interviewed Annett or ITCCS officers.

Nevertheless, ITCCS website traffic has exceeded 300,000 “hits” in the past several days, and legal and political help is pouring in to the Tribunal, especially from Italy and the United States.

The ITCCS is planning public occupations of Catholic churches commencing Sunday, March 24, 2013. It will issue an update and plan of action tomorrow, on this website.

We are fully indebted to the following who gave their support for the month of February 2013: