We have been mentioning Collateral Accounts for more than two years in this blog, and while we understood what its implications for the future are, most of us don’t really know the whole story.

Below is a concise review of its history.

It would also help the reader to read The Corporation: History and Revolution, and this article to strengthen his understanding on the subject. 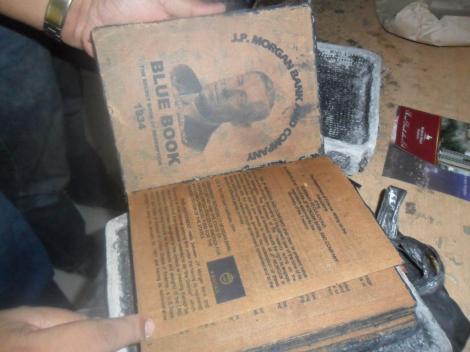 The history behind the Global Collateral Accounts is vast and complex, and reaches back some 250 years. For the purposes of this brief overview, we will focus on two key elements which are now headlining stories around the world: debt, and gold.

The Western banking oligarchy’s current global control can be traced back to the Rothschild family’s dominance of international banking in the early years of the 19th century. The long-term strategy of the elite banking and royal bloodline families was simple: gain control of the global gold supply in order to maintain power through the control of global currency and its underlying collateral.  Gold and Debt – that is the essence of this story.

Where Did the Gold Come from and to Whom Does It Belong?

For two thousand years, the gold of the world flowed east toward China, along the Silk Road, from the Roman Empire, on through to the Byzantine and the Spanish, in exchange for the silks, spices, and treasures of the East.  When the bankers of Europe decided to seek control of the world financial system, control of this gold became essential.

Who created the Global Collateral Accounts and why?

Operation Golden Lily is the well-documented story of the Japanese gold-collecting teams, which infiltrated key gold-holding nations well in advance of the military invasions of China and other nations, with the express intent of seizing the hundreds of thousands of metric tons of gold that had accumulated in Asia (primarily in China).  The Nazi gold-collecting system is well-known, but the Japanese accumulated a far greater hoard, with the knowledge and cooperation of certain European banking interests.

Where is the gold and how did it get there?

The “official” total for the entire amount of gold said to be above ground since humanity first began mining the precious metal is approximately 160,000 metric tons. Evidence now indicates that a more accurate figure is well in excess of two million metric tons. During World War Two, the Japanese dug tunnels and bunkers throughout Southeast Asia to store the gold – primarily in Indonesia, Thailand, and The Phillipines.  After the war, the gold was discovered by the Allies, and was incorporated into a system set up by the European central bankers before the war for this very purpose.  The exact total of the wealth in the off-ledger accounts is not known, but is said to be in the thousands of trillions of dollars in gold, platinum, and gems, in addition to an undetermined amount in Federal Reserve notes and other currencies.

How did the nations come to agree that the Accounts were to be used for humanitarian programs?

At the Bretton Woods Conference in 1944, when the soon-to-be-victorious Allies met to create a new global financial system, the International Monetary Fund was created.  In the late 1940’s, President Sukarno of Indonesia was appointed monetary controller of behalf of the depositors to monitor and implement the Global Accounts for redevelopment purposes.

How did the banking elite abuse the Accounts?

The central banking families had already put in place essential structures to seize and control this wealth: the Bank of International Settlements, the International Monetary Fund, the Council on Foreign Relations, and the United Nations, all of which were funded by elite banking figures, including the Rockefellers and Warburgs. The agreements to use the funds for development were neglected, and the banking elite proceeded to use them for their own ends, blocking the depositors from access. President Sukarno of Indonesia had been appointed “M1” or Monetary Controller of the Accounts (as much of the assets are stored in hidden bunkers in Indonesia), but he was removed from power after making a deal with John F. Kennedy to use the funds to back new U.S. Treasury dollars, in a direct move against the central bankers’ power. Kennedy’s assassination prevented this move from succeeding.

The central bankers put in place a system that allows the Federal Reserve to block anyone but banking elite insiders from using the Accounts, thus blocking the actual owners – the depositors – from utilizing the assets for humanitarian programs, as originally intended.

Who is Neil Keenan and what is his relationship to the Global Accounts?

The emergence of Neil Keenan at the cutting edge of these events can be traced to the theft in 2009 by Vatican financial insider Daniele dal Bosco of $144.5 billion in Federal Reserve notes which were entrusted to Mr. Keenan by the Dragon Family, the group of ancient wealthy clans in Asia who are the legitimate owners of vast amounts of gold in the off-ledger Global Accounts. The Dragon Family has been attempting for decades to utilize the Accounts for their originally intended purpose, and sought out Keenan’s help because of his reputation as a well-connected, tough-minded international businessman.  The story of this theft, and of Mr. Keenan’s filing of a trillion-dollar lawsuit against elite figures and institutions (including the United Nations, the World Economic Forum, The World Bank, the Italian government, the Italian Financial Police, Silvio Berlusconi, and others) was first revealed by Benjamin Fulford, former Forbes Magazine financial editor for Asia, who traveled to Italy to conduct initial investigations, where an attempt was made on his life. The story was then taken up by best-selling author David Wilcock (who then also received death threats), confirming the story in an investigative article on his influential blog.  The 110-page lawsuit, first filed in New York federal court, can be viewed at this link.

In addition to his lawsuit (which he subsequently withdrew in order to re-file in a more effective jurisdiction), Keenan also filed a Cease and Desist order (available upon request) on behalf of the Dragon Family against a Who’s Who of the cabal power structure, putting them on notice that they were defrauding the Global Accounts, and would be prosecuted for any further fraud.  This Cease and Desist names George Herbert Walker Bush, George W Bush, Queen Elizabeth II, the United Nations, Ban Ki Moon, David Rockefeller, Hillary Clinton, and a host of other world figures and organizations who are in the inner circle of the cabal.

The bonds which were stolen from Mr. Keenan were Federal Reserve notes given to the Dragon Family in payment for the gold deposited in the Accounts – notes which the Federal Reserve continually blocked from utilization. Mr. Keenan’s lawsuit represents the first formidable attempt to defeat this theft.

As may be expected, his life is in danger.  He has survived four assassination attempts to date, and now has protection in place from numerous allies around the world.  Mr. Keenan is currently in Indonesia, finalizing agreements with the Indonesian elders, and Chinese officials holding lineal claim to the majority of the assets in the Accounts.

Mr. Keenan is in possession of key documents, such as the original of the Green Hilton Memorial Agreement between Kennedy and Sukarno, and the “Black Book,” secret records of the Accounts.  Numerous other pieces of evidence can be provided. In addition to Mr. Keenan’s participation, other key players may be brought to the table as part of the interview process, including Indonesians involved in the guardianship of the Assets, powerful Asian financial officials, and others. We propose immediate discussions to explore this possibility.

We are very grateful to the following for the love and support they’ve given us for the month of June 2013: