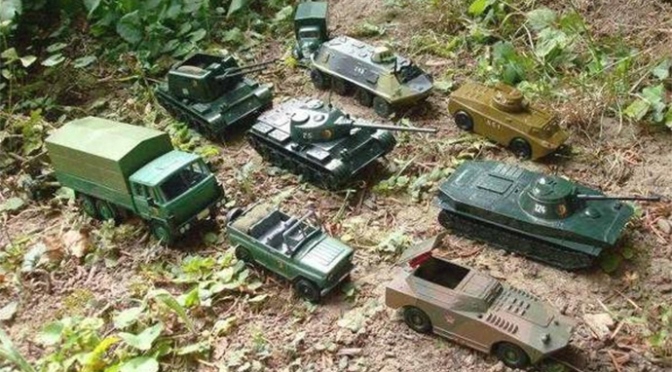 Some of Russia’s diplomats have joined a digital diplomacy row as they trolled NATO by “leaking” on Twitter the alliance’s “most convincing evidence” of Russian troops’ alleged presence in Ukraine.

The Twitter account @RussEmbassyUAE, which is the official Twitter of the Russian Embassy in the United Arab Emirates, posted a picture of tiny toy trucks, tanks and armored vehicles all lined up on the ground, with the words: “#NATO’s latest evidence of #Russian armor invading #Ukraine has been leaked! Seems to be the most convincing ever!”

Users on the social media network seem to have liked the “toy tweet” – the picture was retweeted over 1,000 times and nearly 500 people added it to their “favorites.”

This is evidently a response to NATO’s release of satellite images described as a “proof” of Russia’s military involvement in Ukraine.

A handout photo provided on August 28, 2014 by DigitalGlobe via NATO allegedly shows Russian military units moving in a convoy formation with self-propelled artillery in the area of Krasnodon, Ukraine (AFP Photo / HO / DigitalGlobe)

The images were ridiculed by Russia’s Defense Ministry, while an alliance of seven former US intelligence officers – the Veteran Intelligence Professionals for Sanity (VIPS) – said it was on a par with the“same dubious, politically ‘fixed’ kind used 12 years ago to ‘justify’ the US-led attack on Iraq.”

A digital “war” of maps and pictures first started on Twitter between Canada and Russia on August 27, when @Canada at NATO tweeted a map showing two bordering states – one part was labeled “Russia” while another, Ukraine, was labeled as “not Russia.”

Their Russian counterparts, @Russians at NATO, have hit back with their own map, where they clearly marked the disputed Crimea region as Russian territory.

This recent trolling of NATO coincides with the military alliance’s meeting in Wales, where Russian troops’ alleged presence in Ukraine is one of the key topics.

2 thoughts on “Russians are Already in Ukraine!”