The whirlwind tours and state visits of BRICS leaders across the four corners of the globe for the last couple of months, the consistent Russian position against NATO aggressions,  and the scheduled “simulation” of a banking collapse next week, should give us enough hint that something big is about to happen.

The most anticipated event is so grand even the mainstream media couldn’t contain it, and no amount of false flag operations could ever stop it.

By Paul Eckert and Anna Yukhananov 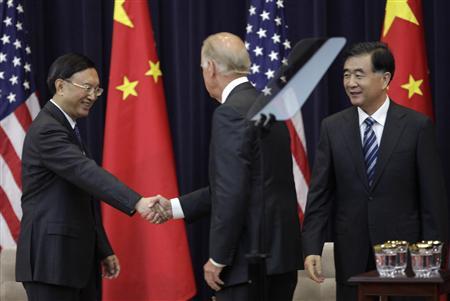 (Reuters) – U.S. officials appealed to China’s self-interest on Wednesday with calls for deeper economic reforms including changes to the exchange rate policy and a halt to cyber theft of trade secrets – actions they said would benefit both nations.

“The next steps that China needs to take for its own economy happen to be in the interests of the United States as well,” he said as the two-day talks opened in Washington.

“Your own plans call for the kinds of changes that have to take place, that are difficult, like here, but if they do, they will benefit us both, including free exchange rate, shifting to a consumption-led economy, enforcing intellectual property rights and renewing innovation,” said Biden.

But Biden did not mince words when he raised the hot-button issue of theft of intellectual property through hacking of computer networks, a conversation complicated by the fugitive spy agency contractor Edward Snowden’s revelations of U.S. electronic surveillance around the world.

“Outright cyber-enabling theft that U.S. companies are experiencing now must be viewed as out of bounds and needs to stop,” said Biden. U.S. officials say all countries spy on each other, but China is unique in its theft of foreign technology.

Burns filled in for Secretary of State John Kerry, who left the meetings Wednesday to care for his ailing wife.

The talks were launched in 2008 with aim of managing an increasingly complex U.S.-China relationship and avoiding competition between the world’s two largest economies from turning into destabilizing conflict.

“Our job in this round … is to turn the important agreements between the two presidents into tangible outcomes, and add substance to this new model of major country relationship,” he said.

Lew welcomed reform plans circulating in China under the new administration of Xi, who took office in March.

However, Lew also aired a list of American complaints about Chinese policies that a watchful U.S. Congress has pressed the Obama administration to tackle.

The United States seeks “an economic relationship where our firms and workers operate on a level playing field and where the rights of those who participate in the global economy – including innovators and the holders of intellectual property – are preserved and protected from government-sponsored cyber intrusion,” said Lew.

China denies being behind the hacking and insists it is a major victim of cyber attacks, including from the United States – an argument that Beijing sees as strengthened by Snowden’s revelations. The two countries held talks focused on cyber issues on Monday and discussed the issue again on Tuesday and Wednesday.

“We were exceptionally clear … that there is a vast distinction between intelligence-gathering activities that all countries do and the theft of intellectual property for the benefit of businesses,” said a senior U.S. official.

“We were very frank with them that you cannot mix apples and oranges in this case,” added a second official.

U.S. businesses also complain about policies that require foreigners to transfer technology to China to gain access to the market, barriers to farm goods, and financial and regulatory favoritism to China’s state-owned companies.

When the meeting split into separate strategic and economic talks, Lew again stressed the importance of reforms – including to the exchange rate – to shift China’s economy from reliance on investment and exports to growth driven by consumption.

“Exchange rate reform is an essential part of this process because it will boost the purchasing power of Chinese households,” he told senior U.S. and Chinese officials.

“The transition will not be easy. But as long as it is delayed, risks in the system continue to build,” added Lew.

In response, Wang said, “I think it will take us at least 5 years to resolve those issues and reach consensus.”

Wang said China had learned much from listening to other views as it modernized its economy since the 1970s. But there were limits to China’s tolerance of criticism, he said.

“Like the United States, we will never accept views, however presented, that undermine our basic system or national interests,” Wang said.

China was expected to air concerns of its own about U.S. policy, including Beijing’s demand that Washington ease Cold War-era controls on high technology exports and clarify the approval process for Chinese acquisitions of American companies.

Across the U.S. capital lawmakers showed their ambivalence about Chinese investment, questioning the head of Smithfield Foods over the proposed sale of the Virginia ham maker to China’s largest pork producer.

U.S. and China Agree to Negotiate a Breakthrough Investment Treaty

“A high-standard U.S.-China Bilateral Investment Treaty is a priority for the U.S. and would work to level the playing field for American workers and businesses by opening markets for fair competition,” Secretary Lew said in a statement. “The commitment made today stands to be a significant breakthrough and marks the first time China has agreed to negotiate a Bilateral Investment Treaty, to include all sectors and stages of investment, with another country.”