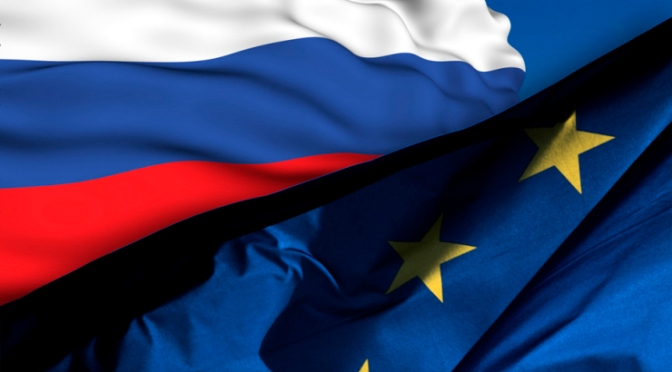 It’s official: The European Union won’t go to war with Russia over Ukraine and is not sending any lethal aid to Poroshenko’s highly illegal government.

A few days ago, it was found out that while the US was pushing the Eurozone for more sanctions against Russia, the US itself is making a killing on the trade growth between the two countries, while the EU economy is hemorrhaging even before the sanctions were imposed.

The world of the warmongers is evidently getting smaller by the day, and we may be closing in to the global announcement for across-the-board debt forgiveness and the commencement of massive redevelopment initiatives.

The EU is resisting calls from hotheads to supply arms to Ukraine, saying it won’t be pulled into a confrontation with Russia. Europeans cite the progress in implementing a ceasefire in eastern Ukraine between Kiev and local rebels.

The idea of providing lethal aid to Kiev is popular among many NATO officials and American politicians. US House Speaker John Boehner and a bipartisan group of top lawmakers called on President Barack Obama to deliver the weapons. But Europeans are opposing the move, which would likely escalate tensions with Russia.

“The European Union today is extremely realistic about developments in Russia. But we will never be trapped or forced or pushed or pulled into a confrontative [sic] attitude,” the EU’s Foreign Policy Chief Federica Mogherini told the media on Friday, following an informal meeting of EU foreign ministers in Riga, Latvia.

“We still believe that around our continent – not only in but around – cooperation is far better than confrontation. We still argue for that,” she added.

Austrian Foreign Minister Sebastian Kurz said the EU’s goal in Ukraine is “a ceasefire, not an escalation.”

Germany has been among the most vocal critics of sending arms to Ukraine and now German officials question the assessment of the situation in the country voiced by Kiev armament pundits.

“The statements [on Ukraine] from our source do not fully coincide with the statements made by NATO and the US,” German FM Frank-Walter Steinmeier said after the conference. “We are interested in not allowing it to grow into a misunderstanding.”

The German Spiegel magazine reported on Saturday that Chancellor Angela Merkel’s government suspects the US and NATO of trying to derail the EU’s mediation effort in Ukraine.

The Minsk ceasefire agreement between Kiev and rebels in eastern Ukraine was brokered last month by Germany, France and Russia. So far, it’s mostly holding, with both parties pulling some of their heavy weapons back from the front line, and OSCE monitors reporting a significant reduction in violence.

The EU says it wants to increase the number of OSCE observers on the ground, doubling its current ceiling of 500.

“The main point is obviously working to increase the number of selected and skilled people that can do the job,” Mogherini said. The more observers the tougher it would be to violate the conditions of the Minsk agreement with impunity.

Kiev and its foreign backers, particularly in Washington, accuse Russia of propping up the rebel forces with weapons and troops. Moscow insists that it has no involvement in the armed conflict and has only delivered humanitarian aid to the ravaged areas.

Europe Blocks U.S. from Racing to War Against Russia

On Friday, 6 March, President Obama placed temporarily on ice his planned increase in weapons and soldiers to help the Ukrainian Government to ‘defend’ Ukraine against the ‘terrorists’ in Donbass, which is the Ukrainian region that had voted 90% for the President whom the Obama Administration overthrew in February 2014. (Here is where the EU first learned, on 26 February 2014, that the overthrow of Viktor Yanukovych had been a coup instead of a genuine popular revolution.) Obama replaced that Government with a racist-fascist anti-Russian regime, which quickly set about exterminating as many residents of Donbass as possible, as quickly as possible (calling them ‘terrorists,’ for their refusal to be ruled by the new Obama-imposed, anti-Russian, Government).

According to German Economic News, Germany’s Angela Merkel and France’s Francois Hollande are balking at the speed of Obama’s rush to war against Russia.

Earlier, some of the smaller national economies in the European Union — the Czech Republic, Hungary  and Greece — dissented from America’s effort to increase economic sanctions and military measures against Russia. But there is now increasing pressure upon the leaders in Germany, France, and Italy, also to separate the EU from the American rush to war against Russia.

Here is my translation of the key passage from the article on this matter, dated March 7th, in German Economic News:

“Apparently, the developments have shown that in the Euro-zone the Americans’ desire for a full escalation of the conflict against Russia could no longer be accepted without objection by the Europeans. The Americans were apparently informed by Angela Merkel and Francois Hollande that they are concerned about the rise of France’s National Front Party: Its chairman, Marine Le Pen, rejects the current EU policy towards Russia. If the National Front comes to power in France, it would be almost impossible for the EU to pursue a U.S.-coordinated foreign policy, such as they both want to do. Therefore, Merkel and Hollande aim to contain the negative economic consequences to their own nations of sanctions against Russia, so as to prevent victory for the National Front.

“Italian Prime Minister Matteo Renzi has spoken with President Putin in Moscow on a stronger partnership between Italy and Russia. The Italians are feeling the effects of the sanctions particularly strongly, and want to avoid an escalation in any case.

“Greek Foreign Minister Nikos Kotzias also has doubts as to the purpose of the US sanctions policy of the EU.”

Washington criticizes many European politicians for their opposing Washington’s anti-Russian policies. In Hungary and France, nationalist political parties offer especially strong resistance, because they oppose their own nation’s being ruled by Washington’s dictates. Even though Washington backs nazis in Ukraine, some European right-wing (though not nearly as far right-wing as in Ukraine) parties are patriotically opposed to European taxpayers donating to fund Ukraine’s fascists. The odd result is that some semi-fascist parties in Europe are especially balking at the extreme fascism, even nazism, that Washington supports in Ukraine. It’s too far to the right for them to go; they don’t want to be forced to go that far; they don’t want their nation to fund Washington’s aims.

Obama thus needs to juggle many balls at once in order to keep the Western Alliance together with him in his overriding foreign-policy goal of destroying Russia.

Investigative historian Eric Zuesse is the author, most recently, of  They’re Not Even Close: The Democratic vs. Republican Economic Records, 1910-2010,  and of  CHRIST’S VENTRILOQUISTS: The Event that Created Christianity.

(VOVworld)- The European Union and Russia have agreed to strengthen their special partnership. At their summit in Brussels on Tuesday, the two sides discussed bilateral cooperation in trade and energy, visa exemption, and measures to strengthen the strategic partnership and connect the Asia- Europe Alliance with the EU. In particular, both sides agreed to set up a joint gas complex and issued a statement on anti-terrorism. Speaking at a press conference after the summit, Russian President Vladimir Putin said Russia always respected the sovereignty and self-reliance of neighboring countries.

He said Russia had no intention to intervene Ukraine’s internal affairs and will provide Ukraine with an aid of 15 billion USD as agreed. The Russian President criticized some Western European countries for blaming Russia for pressing Kiev to abandon the latter’s cooperation with the EU. President of the European Council Herman Van Rompuy and President of the European Committee Jose Manual Barroso said that the European Union wanted to come closer with Russia in terms of economics. The next Russia-EU summit will be held in June in Sochi city, Russia to resolve trade disputes and strengthen the bilateral strategic partnership.