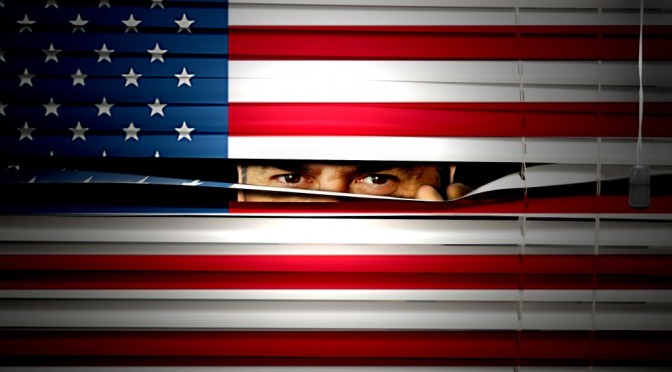 More than a decade ago, the notorious US Patriot Act was passed by the US Congress without most of its lawmakers having read and completely understood what’s in there.

Now, they want us to know that they don’t really need it anymore. Maybe because they’ve been watching us even before the Act was even conceived and passed.

Mass surveillance will continue until the whole system is replaced, and the brains of the Satanists are completely exorcised.

House lawmakers Mark Pocan (D-Wis.) and Thomas Massie (R-Ky.) are co-sponsoring bill H.R.1466, which was introduced on Tuesday and would repeal the 2001 Patriot Act, limit powers of the FISA Amendments Act, and prohibit retaliation against federal national security whistleblowers, according to The Hill.

“The Patriot Act contains many provisions that violate the Fourth Amendment and have led to a dramatic expansion of our domestic surveillance state,” said Rep. Massie in a statement. “Our Founding Fathers fought and died to stop the kind of warrantless spying and searches that the Patriot Act and the FISA Amendments Act authorize. It is long past time to repeal the Patriot Act and reassert the constitutional rights of all Americans.”

As it looks right now, this is HUGE!!!! If this is what it appears to be, we have to fight like animals for it! – http://t.co/nHoXtd0MGB

Specifically, the bill would revoke all the powers of the Patriot Act, and instruct the Director of National Intelligence and the Attorney General to destroy any information collected under the FISA Amendments Act concerning any US person not under investigation.

It would repeal provisions of the FISA Amendments Act to ensure surveillance of email data only occurs with a valid warrant based on probable cause. The bill would also prohibit the government from mandating that manufacturers build mechanisms allowing the government to bypass encryption in order to conduct surveillance.

READ MORE: ‘You are surveillance target’ – Snowden to IT specialists

Additionally, the bill would protect a federal whistleblower’s efforts to expose mismanagement, waste, fraud, abuse, or criminal behavior. It would also make retaliation against anyone interfering with those efforts – such as threatening them with punishment or termination – illegal.

“Really, what we need are new whistleblower protections so that the next Edward Snowden doesn’t have to go to Russia or Hong Kong or whatever the case may be just for disclosing this,” Massie said.

There have been previous attempts to limit dragnet surveillance under the Patriot Act since former National Security Agency analyst Edward Snowden leaked information regarding the programs in 2013, but the Senate bill introduced in 2013 never reached the floor for a vote.

“The warrantless collection of millions of personal communications from innocent Americans is a direct violation of our constitutional right to privacy,” said Rep. Pocan in a statement.

“Revelations about the NSA’s programs reveal the extraordinary extent to which the program has invaded Americans’ privacy. I reject the notion that we must sacrifice liberty for security – we can live in a secure nation which also upholds a strong commitment to civil liberties. This legislation ends the NSA’s dragnet surveillance practices, while putting provisions in place to protect the privacy of American citizens through real and lasting change.”

Portions of the Patriot Act are due for renewal on June 1.

We are updating our DNS to www.geopolitics.co to make it more descriptive to our discussions here. Our old www.eclinik.co will be pointing to our healthcare site soon.