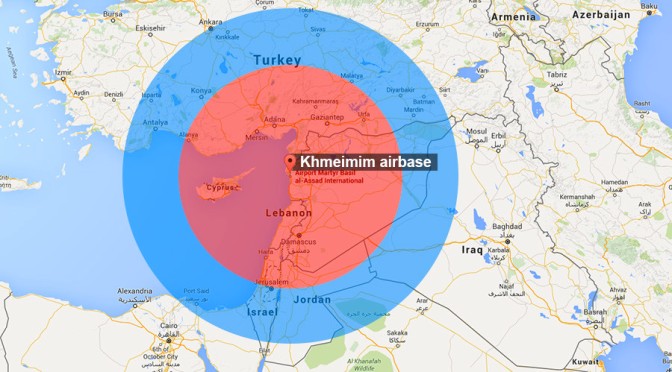 Russia is not taking chances this time. With the delivery of its S400 Self-Targeting SAM systems, a 600-kilometer radius from Khemeimim Airbase is now under full electronic surveillance and most of Syria is covered with surface-to-air missile system protection.

The highly advanced S400 SAM system is said to have no equal in terms of accuracy and reliability anywhere around the world today.

Any aircraft taking off from any Turkey airbase is now being monitored and will be fired upon when entering Syrian side of the border as the implied default countermeasure. Everyone is duly advised about such installation, of course.

“Both the American and Turkish air forces halted their strikes on Syrian territory around the time Russia deployed S-400 air defense complexes at the Khmeimim airbase, from which it stages its own incursions against Islamic State (IS, formerly ISIS/ISIL).

… As CJTF-OIR reported on Friday, the US-led coalition had made no sorties against targets in Syria since Thursday, while airstrikes against Islamic State in Iraq continued, with the coalition making 18 strikes on terrorist positions.

… S-400 Triumph system missile launchers were airlifted to Syria by Antonov An-124 Ruslan super-jumbo aircraft 24 hours after the decision was announced on Wednesday.

The S-400 engages targets at distances as far as 400 kilometers and heights of up to 27 kilometers (or higher with newer missiles). This is enough to cover at least 75 percent of Syrian territory, along with the airspaces of Lebanon, Cyprus, half of Israel and a vast part of Turkey.

The S-400’s radar has a range of 600 kilometers and is capable of discriminating even objects moving on the ground, such as cars and military vehicles.

S-400 radar covers Syria, western regions of Iraq and Saudi Arabia, nearly all of Israel and Jordan, Egypt’s northern Sinai, a large part of the eastern Mediterranean and Turkish airspace as far as the capital Ankara.”

Russia is, in effect, imposing a no-fly zone on the Syrian-Turkish border and the rest of the country without ever calling it as such. But this is not the only problem that Turkey and rogue CIA operators are facing right now. 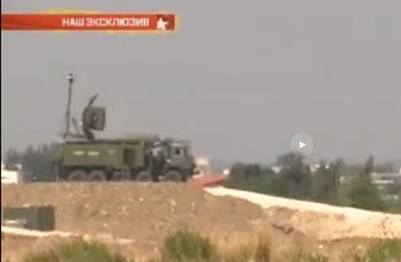 The Krasukha-4 broadband multifunctional jamming station is mounted on a BAZ-6910-022 four-axle-chassis. Like the Krasukha-2, the Krasukha-4 counters AWACS and other air borne radar systems. The Krasukha-4 has the range for effectively disrupting low Earth orbit (LEO) satellites and can cause permanent damage to targeted radio-electronic devices.[2][5] Ground based radars are also a viable target for the Krasukha-4.[1]

About 2 weeks ago, an agreement was reached between Russia and Armenia to create a joint missile air defense system in the South Caucasus and to introduce Russian troops into the country whenever a need arises. Armenia is Turkey’s northeast neighbor and to which Turkey murdered 1.5 million of the population, a hundred years ago.

Vladimir Putin and a number of Western dignitaries paid respect to the Armenian Genocide during its centenary commemoration ceremony, to the deep consternation of Erdogan.

With the loss of trust for Turkey, Russia is said to be sending 7,000 troops to Armenia-Turkey border to prevent the friendly nation from being held hostage when a full blown conflict arises with the Erdogan government, unconfirmed reports indicate. Such contingent shall come from Russia’s North-Caucasian Military District

Yesterday, Putin has also signed an extensive instruction on the economic sanctions against the backstabbing government of Erdogan.

Russian President Vladimir Putin has signed a decree imposing a package of economic sanctions against Turkey following its downing of a Russian Su-24 bomber in Syria. The measures include banning several Turkish organizations and the import of certain goods.

A decree on “measures providing the national security of the Russian Federation and the protection of its citizens against criminal and other unlawful acts, and on imposing special economic measures in relation to Turkish Republic” was signed on Saturday, the Kremlin press service said.

Under the decree, the import of certain products originating from Turkey will be temporarily banned or restricted.

A number of Turkish organizations operating in Russia will also be restricted.

Employers in Russia will be prohibited from hiring Turkish nationals for work starting January 1, 2016.

The ban will touch upon only new workers, the decree said, adding that employees who already officially hired as of December 31, 2015 will not fall subject to the sanctions.

The president has directed the government to introduce a ban on charter flights between Russia and Turkey. Russian travel agencies have been advised to stop selling tours to Turkey, the Kremlin announced.

The government has also been tasked with enhancing security control at Russian ports in the Sea of Azov and Black Sea. The illegal presence and movement of Turkish vessels near to the sea ports must be prevented, the decree said.

Bringing Turkish products into Russia for personal use will not be restricted, the decree said.

The visa-free regime for Turkish nationals traveling to Russia will be suspended starting from 2016, the decree signed by the Russian leader says.

It will not affect those who have residence permits, as well as Turkish diplomats working in Turkish embassies and consulates on the territory of Russia, and their families.

A list of contracts not to be affected by the new economic measures will be compiled by the Cabinet, the Kremlin said in its Saturday statement.

Meanwhile, many businesses in Turkey have expressed fears Russian sanctions might badly hit the Turkish economy, affecting its trade and tourism industries. According to Russian Minister of Economic Development Aleksey Ulyukaev, the Turkish Stream project to deliver Russian natural gas to Turkey, and the construction of a nuclear power plant in the country could also be canceled.

Based on the initial measures stipulated above, Putin is very careful not to hurt directly the economic well-being of ordinary Turkish citizens but is only surgically targeting the Erdogan government, which should provide enough pressure for the early toppling from power the erring Turkish administration.

That is the only outcome that will satisfy the Russians as far as Turkey is concerned.