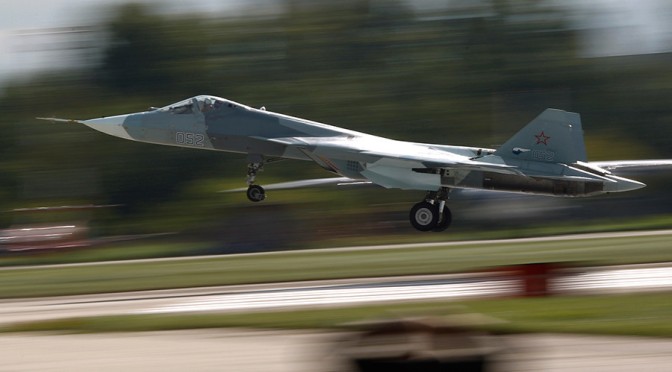 “Since 2003, Moscow has watched with infinite patience as US-led forces have steadily steamrolled a path of chaos and carnage across a large swath of Central Asia, the Middle East and North Africa.

This year Vladimir Putin drew a line at Syria.” 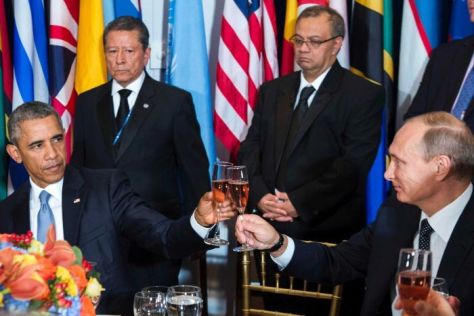 Barely 2 days after the above high-level toast between the two leaders who were exhausted of their mega speeches at the UN General Assembly, Putin ordered the massive bombardment against the CIA trained Islamic State in Syria.

After the unexpected Turkish ambush of its warplane, he further ordered the delivery of some of the most advanced weaponry from the Russian arsenal into the Syrian theater.

Since 2003, Moscow has watched with infinite patience as US-led forces have steadily steamrolled a path of chaos and carnage across a large swath of Central Asia, the Middle East and North Africa.

This year Vladimir Putin drew a line at Syria.

In an age when diplomats regularly correspond with each other behind the cold cover of firewalls and Twitter accounts, Moscow’s method of informing its US partners that it would start bombing operations in Syria was reminiscent of a gesture from a more chivalrous era.

Washington said it first learned of Moscow’s plans in Syria when it received a personal visit from a Russian general who appeared at the US Embassy in Baghdad.

Just hours later, the Russian military – with the full support of Damascus – stunned the world by opening a powerful aerial assault against Islamic State forces in Syria where they were stubbornly entrenched not only as a viable fighting force, but as the owners and operators of a profitable oil-producing enterprise, no less.

This Russian demonstration of shock-and-awe provided an exclamation point to comments delivered by President Vladimir Putin, who just one day earlier had berated Western powers in the UN General Assembly for the massive mess they had created in the region.

“I’m urged to ask those who created this situation: do you at least realize now what you’ve done? But I’m afraid that this question will remain unanswered, because they have never abandoned their policy, which is based on arrogance, exceptionalism and impunity,” Putin told the audience.

The Russian leader went on to make a direct connection between the West’s blundering foreign policy, which has recklessly usurped various leaders and governments without any clear idea as to what or who will fill the vacuum, and the rise of Islamic State.

“The so-called Islamic State has tens of thousands of militants fighting for it, including former Iraqi soldiers who were left on the street after the 2003 invasion. Many recruits come from Libya whose statehood was destroyed… And now radical groups are joined by members of the so-called ‘moderate’ Syrian opposition backed by the West. They get weapons and training, and then they defect and join the so-called Islamic State,” he noted.

Putin is far too experienced a statesman to say exactly which global power(s) might be interested in cannibalizing the broken bits and pieces of Iraq, Libya and Syria and turning them into a private proxy army, but he left no doubt that the rise of Islamic State was by no means an accident.

“In fact, the Islamic State itself did not come out of nowhere,” Putin said, in what may have been the most telling yet downplayed part of his speech. “It was initially developed as a weapon against undesirable secular regimes.”

Putin is by no means alone in this belief. In May of this year, Judicial Watch, in response to Freedom of Information Act requests and lawsuits, became privy to some highly explosive Pentagon documents that were compiled about a year before Islamic State appeared on the global stage in their Toyota trucks and US-made weapons.

The document states that “The Salafist [Islamic State], the Muslim Brotherhood, and AQI [Al-Qaeda in Iraq] are the major forces driving the insurgency in Syria. The West, Gulf countries, and Turkey support the opposition; while Russia, China, and Iran support the regime.”

“If the situation unravels there is the possibility of establishing a declared or undeclared Salafist principality in Eastern Syria… and this is exactly what the supporting powers [i.e. The West, Gulf countries and Turkey] to the opposition want, in order to isolate the Syrian regime, which is considered the strategic depth of the Shia expansion (Iraq and Iran).”

As the Washington Blog pointed out, the document proves what so many opponents of the Syrian intervention have been saying for five years: There is no “moderate opposition” in Syria.

“It shows that extreme Muslim terrorists – Salafist, Muslims Brotherhood, and AQI… have always been the “major forces driving the insurgency in Syria.”

It is no wonder that US policies seem to have created far more terrorists than they’ve eliminated – essentially because it is part and parcel of the strategy from the beginning to use these terrorists as proxy armies to take out undesirable governments.

Russia came to the realization that not doing anything about Islamic State was a far riskier alternative than allowing this group of savages to continue to flourish practically unmolested in Syria in dangerous proximity to the Russian border, not to mention Russia’s naval base at Tartus.

“It doesn’t concern me in the slightest,” US Senator John McCain said in 2013, when asked if he thought Russia and China would intervene in Syria. “Because they will not act.”

“The United States is the most powerful nation in the world, and we’re not going to be intimidated by Russia and China,” he continued. “We are not, so I guarantee you that they will not act.”

NATO-member Turkey, who has been accused of purchasing oil from Islamic State, was also caught unawares by Russia’s lightning move in Syria [Incidentally, Russia the only country that is operating in Syria with the full legal backing of the Syrian government]. In fact, Ankara, oddly enraged over Russia’s determined efforts to destroy not only Islamic State’s command center, but its oil business as well, took the world to the brink of World War III when it shot down a Russian fighter jet that it says crossed into Turkish territory.

Meanwhile, a recent statement by a Turkish official revealing detailed information of Russian Air Force sorties in Syria can be regarded as “official acknowledgment” that the operation to down the Su-24 was a planned one, Russia’s Ministry of Defense said.

“When on November 24 the Turkish fighter jet treacherously fired a rocket at our Su-24, the Turkish General Staff was perfectly aware about when and where our two bombers would be carrying out their mission,” ministry spokesman Major General Igor Konashenkov told journalists on Wednesday.

Clearly, Putin’s decision to enter the Syrian conflict was a risky one, yet it appears now for all the wrong reasons. Incredibly, Moscow seems to be having less of a problem handling Islamic State than it is with those Western states that had proclaimed their dedication to wiping out the terrorist organization in the first place.

Russia’s military operation in Syria has uncovered a hornet’s nest of illicit activity, much of which is only indirectly connected to Islamic State. Where such disturbing revelations will lead us in 2016, it is too early to say, but the prospects for peace in Syria anytime soon do not look very likely.