About five days ago, the US Navy released a video allegedly showing Iranian missiles being fired near USS Harry S. Truman aircraft carrier in the Persian Gulf. Iran refutes the claim much earlier as “US propaganda.”

Then, just a day ago, two US military boats and its personnel were caught “drifting” into Iranian waters. Were they really drifting unintentionally, or were the two boats forced to drift by way of remote navigation control?

We are talking here of highly maneuverable and high speed sea craft, and not some Somali pirate ship, or dilapidated Syrian refugee boats.

“Known as the Riverine Command Boats (RCB), the vessels are often used to transport infantry and special operations forces. The CB-90s are approximately 50 feet (15.25 meters) long and can reach speeds up to 40 knots, according to specifications released by the Swedish Navy.”

#BREAKING: New photos show moment of arresting 2 US boats, 10 on board by IRGC pic.twitter.com/yNhai2YTPU

On top of the two direct military provocations, we also have witnessed the unjustified execution of a prominent Shiite cleric.

For those who have been around for quite a while, it is too easy to point out at least two countries which are trying to sabotage the implementation of the nuclear peace accord between the Pentagon and the Iranian revolutionary government.

But no matter how they try, the Moscow Conference on International Security [MICS] countries will never take the bait. They don’t need to. They are holding up all the ace. They have also learned the Oriental way of winning wars without firing a single bullet.

That’s the type of warfare that the Satanists may have used in the past but are never prepared to be at the receiving end. They’ve been using psychological warfare far too extensively for far too long, and now that the Reformist Collective has returned the favor, they don’t know what to do with it and are evidently in panic mode.

They can’t start a war anymore. The US Armed Forces personnel themselves are standing down.

They don’t want to be used as pawns, no more, the Christiane Amanpour Network talking heads can only cry in deep consternation…

“It was a mistake that was our fault and we apologize for our mistake,” said the U.S sailor, who was identified by Iran’s Press TV as the commander. “It was a misunderstanding. We did not mean to go into Iranian territorial water. The Iranian behavior was fantastic while we were here. We thank you very much for your hospitality and your assistance.”

#BREAKING: New photos show moment of arresting 2 US boats, 10 on board by IRGC pic.twitter.com/yNhai2YTPU

We further suspect that these Seal Team operatives were not just passing though but could be on a covert mission to launch false flag operation against Iran and caught red-handed.

The mainstream media are not sure whether the two captured boats and weapons were returned with the released personnel. Remember, Iran has captured UAV drones in the past but have never returned any of these spoils, or evidence, yet.

“After tough sanctions imposed by the United States and the West, Iran has given into the demands of President Obama, well some demands.

Iran is returning the RQ-170 drone that was hacked back in December of last year.

There are some differences though: it’s pink, it’s about one eightieth the original size and being marketed as a toy in Iran.

According to some reports the toys have already hit shelves In Tehran and carry a $4 price tag. The display of silliness has many US officials irate at the charade, but no need to get upset.

President Obama will be receiving his very own custom built toy drone as well.” 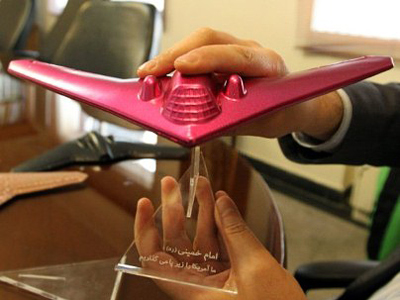 “We wanted for Mr. Obama himself to have these toys and know that Iranians don’t leave anyone’s requests unanswered. We made the ‘RQ’ in pink as it is Mr. Obama’s favorite color and we will send it to him via the Swiss embassy,” said Seyyed Saeed Hassan-pour, head of the cultural department of the Aaye Company, to Reuters.

One of the significant sources of funds for the Nazionist Khazarian Mafia is the healthcare industry which registered a whopping $3.09 trillion in 2014, and is projected to soar to $3.57 trillion in 2017, in the US alone. We believe that this is just a conservative figure.

One thought on “Iran Under Multiple Systematic Provocations”