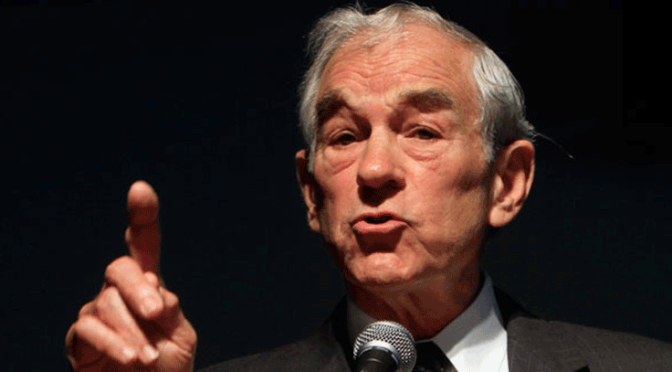 This the big question that Ron Paul asks of Trump whom he thinks is the real establishment’s candidate this time around.

Below, is Donald Trump posing with his golf buddies…

“Yes, Donald Trump is shrewd and really wants to sell himself as an outsider. He understands how to stir the many people who are unhappy. But when you get beyond the theatrics, he’s not really an outsider at all. “

Ron Paul prefers that a libertarian will manage the White House and change its policies both domestic and diplomatic. Other parties, Republican and Democrat, he said, are just pretending to be outraged by Trumps views on Muslims when essentially they approved and endorsed all his views on the matter.

“And the frightened masses flocking to this decisive leader believing that he will protect and take care them”, he adds.

More than seven years ago, Obama did the same thing 😉

Like we have said, why is it that electing presidents is like one huge trial and error experiment?

Why do we keep using the same method when it has proven itself to be ineffective for the last 300 years?

We should stop kidding ourselves already and accept the fat that the whole system is rigged, we know it’s rigged, and the candidates’ words are not etched in stone. We allowed that to happen.

Another thing that we have allowed to happen is the Rothschild dynasty’s control of America through Israel, and the British Monarchy. Yes, that is old news for some of us, but that is not the point.

The point is, what are we doing about it?

One of the changes to the current system is for the people to have a list of the reforms that they want to be implemented during the next presidential term, and every candidate must be made to commit and sworn to for its proper implementation.

This means that the president is reduced to being just a manager that will make it sure that the popularly formulated and approved policies are properly implemented, as efficiently as possible.

It’s time that we do away with perpetually broken campaign promises, covert geopolitical policies, and covert external interference. They have not made any country any stronger.

A country is only as strong as the fully empowered individuals comprising it, not the minority corporate political elite, nor the military industrial complex that is now proven to be useless in the face of the Russian’s ability to shutdown the Aegis missile shield system, the cash cow known as the F-35 5th generation stealth fighter,  or the Chinese ability to shut down the US power grid through EMP.

Any technological advancement is only as useful if one has the monopoly of it, and that is not the prevailing reality today. Anymore advancements in the realm of military is absolutely useless.

It’s high time that all resources of the State be diverted to more progressive endeavors.

There’s a lot that could be done with a system that allows real-time, direct participation and collaborative engagement. The internet-based Open Source Government must be exploited right now, and the Rule of the Few through the Middlemen must be ended.

It’s only by changing the method that we can change the outcome.

Aside from the fiat monetary scam and blood-soaked petrodollar, another significant source of funds for the Nazionist Khazarian Mafia is the “healthcare” industry which registered a whopping $3.09 trillion in 2014, and is projected to soar to $3.57 trillion in 2017, in the US alone. We believe that this is just a conservative figure.

11 thoughts on “Trump, He’s Not Really an Outsider | Ron Paul”