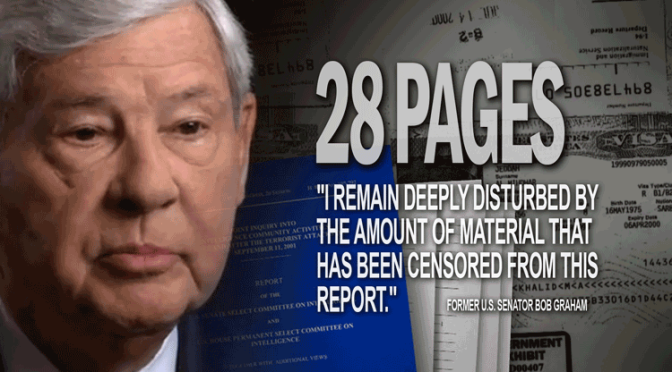 On the surface we can appreciate CBS News’ effort to dig deeper into Saudi Arabia’s participation to the controlled demolition of WTC towers in 2001.

What we can’t stomach is its continued cover-up of the British Monarchy’s culpability to the event and the overall War of Terror where the British BAE Systems has benefitted hugely from.

“It turns out that the number one reason why the report of the investigation must be suppressed is the culpability of the British Monarchy which can be established by following the money from the operatives to the House of Saud onto the Queen’s bank account.

The Queen’s bank account is of course replenished every now and then by the biggest banker of all, the Rothschild. And if so, will the Jesuits running the Roman Vatican Empire be far behind?

After all, the Jesuits are always working with the Rothschilds from behind the scenes. But this is not the full picture yet.

The real objective of the WTC 911 false flag was not only to distract the population by the inducement of fear, but to gain perpetual control over the Global Collateral Accounts — the backbone of the world’s financial system.”

Indeed, the mainstream media still has a lot of catching up to do.

The following script is from “28 Pages” which aired on April 10, 2016. Steve Kroft is the correspondent. Howard Rosenberg and Julie Holstein, producers.

In 10 days, President Obama will visit Saudi Arabia at a time of deep mistrust between the two allies, and lingering doubts about the Saudi commitment to fighting violent Islamic extremism.

It also comes at a time when the White House and intelligence officials are reviewing whether to declassify one of the country’s most sensitive documents — known as the “28 pages.” They have to do with 9/11 and the possible existence of a Saudi support network for the hijackers while they were in the U.S.

For 13 years, the 28 pages have been locked away in a secret vault. Only a small group of people have ever seen them. Tonight, you will hear from some of the people who have read them and believe, along with the families of 9/11 victims that they should be declassified.

Steve Kroft: And you believe that the 28 pages are crucial to this? Understand…

Bob Graham: I think they are a key part.

Former U.S. Senator Bob Graham has been trying to get the 28 pages released since the day they were classified back in 2003, when he played a major role in the first government investigation into 9/11.

Bob Graham: I remain deeply disturbed by the amount of material that has been censored from this report.

At the time, Graham was chairman of the Senate Select Committee on Intelligence and co-chair of the bipartisan joint congressional inquiry into intelligence failures surrounding the attacks. The Joint Inquiry reviewed a half a million documents, interviewed hundreds of witnesses and produced an 838 page report — minus the final chapter which was blanked out — excised by the Bush administration for reasons of national security.

“I remain deeply disturbed by the amount of material that has been censored from this report.”

Bob Graham won’t discuss the classified information in the 28 pages, he will say only that they outline a network of people that he believes supported the hijackers while they were in the U.S.

Steve Kroft: You believe that support came from Saudi Arabia?

Steve Kroft: And when we say, “The Saudis,” you mean the government, the–

Bob Graham: All of the above.

Graham and others believe the Saudi role has been soft-pedaled to protect a delicate relationship with a complicated kingdom where the rulers, royalty, riches and religion are all deeply intertwined in its institutions.

Porter Goss, who was Graham’s Republican co-chairman on the House side of the Joint Inquiry, and later director of the CIA, also felt strongly that an uncensored version of the 28 pages should be included in the final report. The two men made their case to the FBI and its then–director Robert Mueller in a face-to-face meeting.

Porter Goss: And they pushed back very hard on the 28 pages and they said, “No, that cannot be unclassified at this time.”

Steve Kroft: Did you happen to ask the FBI director why it was classified?

Porter Goss: We did, in a general way, and the answer was because, “We said so and it needs to be classified.”

Goss says he knew of no reason then and knows of no reason now why the pages need to be classified. They are locked away under the capital in guarded vaults called Sensitive Compartmented Information Facilities, or SCIFs in government jargon. This is as close as we could get with our cameras — a highly restricted area where members of Congress with the proper clearances can read the documents under close supervision. No note-taking allowed.

Tim Roemer: Look, the Saudis have even said they’re for declassifying it. We should declassify it. Is it sensitive, Steve? Might it involve opening– a bit, a can of worms, or some snakes crawling out of there? Yes. But I think we need a relationship with the Saudis where both countries are working together to fight against terrorism. And that’s not always been the case.