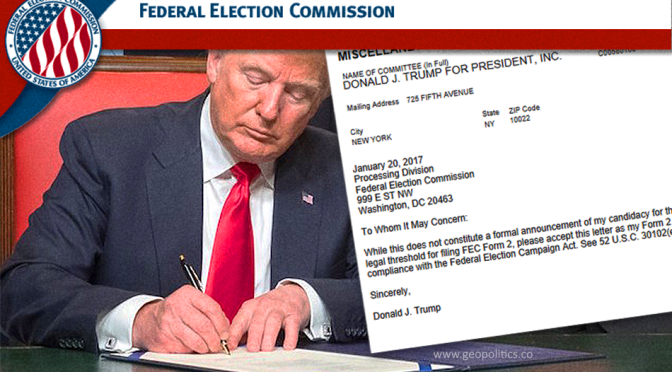 Starting January 20th, any Soros non-government organizations may not engage themselves in politicking against the incumbent US President Donald Trump without risking their non-profit status.

This is the legal consequence of the recent Form 2 filing at the Federal Election Commission by the Donald J. Trump for President, Inc.

This simple legal foresight means that the Soros-Rothschild camp can only rely on their mainstream media to ruin his term.

But, considering the continued downfall of the mainstream media’s integrity, this action should send another bout of panic for the established system.

There are other countries that are rising up against the system which Soros built along with other likeminded cohorts.

“Hungary has had enough. The nation’s government has declared a battle against organizations funded by George Soros, calling for transparency within foreign-backed NGOs operating in the country. The move has already been condemned by Brussels, but Budapest has long refused to tow the EU line – on refugees, ties with Russia, and other issues. Can Hungary continue to put its own interests above those proclaimed to be common European interests? We ask Hungarian Foreign Minister Peter Szijjártó.” – SophieCo

History doesn’t repeat itself, but it does rhyme, the American humourist Mark Twain is often quoted as saying.

So when billionaire investor George Soros said last week that a hard-landing in the Chinese economy was “unavoidable” and that he was shorting Asian currencies, the country’s central bankers could be forgiven if they recalled the poetic justice of a hard-won financial battle 18 years ago, when Hong Kong was the battlefield and Soros was defeated.

In 1998, Soros, whose aggressive currency trades were blamed for destroying the Thai and Malaysian economies in the Asian financial crisis a year earlier, turned his attention to attacking Hong Kong markets. On that occasion, Hong Kong, backed by Beijing, faced him with an unprecedented HK$118 billion stock-buying spree to prop up stock prices and defend the currency peg in August 1998.

… In 1998, Soros was forced to walk away from Hong Kong with losses. He later praised the Hong Kong administration’s efforts under then-financial secretary Donald Tsang Yam-kuen.

When Soros visited Hong Kong in 2001 he said local monetary authorities had done “a very good job when they intervened to arrest the collapse of the Hong Kong market”.

“When Soros blew the war horn in 1997, many domestic companies and individuals in Thailand or Malaysia followed him, instead of their government, to change money into dollars,” said Sun. “China is different – all the major banks listen to the government, the majority of financial assets are in state hands, and a meeting with the financial bosses can put all of them on the same line.”

Aside from China and the entire ASEAN Community, Russia also has an axe to grind against anything that has to do with George Soros.

Russia has banned a pro-democracy charity founded by hedge fund billionaire George Soros, saying the organization posed a threat to both state security and the Russian constitution.

In a statement released Monday morning, Russia’s General Prosecutor’s Office said two branches of Soros’ charity network — the Open Society Foundations (OSF) and the Open Society Institute (OSI) — would be placed on a “stop list” of foreign non-governmental organizations whose activities have been deemed “undesirable” by the Russian state.

George Soros, through his vast network of non-government organizations, has been manipulating the political affairs, not just in Asia, China and Russia, but even in his own province.

Going through the George Soros leaked email cache is some scary stuff.

The Hungarian Billionaire and his NGOs wield immense power, and the documents that are being shared by DC Leaks show how Soros topples governments and incites civil wars so he can make huge financial profits.

This is an immense trove of Soros NGO minutes, white papers, excel budgets, and media plans that details how Soros and his NGOs run governments and financial institutions from behind the curtain.

You can find the complete, searchable, files at the DCLeaks website, which describe Soros and his network of NGOs as having “slaves spill blood of millions and millions people just to make him even more rich.

George Soros is a Hungarian-American business magnate, investor, philanthropist, political activist and author who is of Hungarian-Jewish ancestry and holds dual citizenship. He drives more than 50 global and regional programs and foundations. Soros is named as the architect and sponsor of almost every revolution and coup around the world for the last 25 years. Thanks to him and his puppets, USA is thought to be a vampire, not a lighthouse of freedom and democracy.

His slaves spill blood of millions and millions people just to make him even more rich. Soros is an oligarch sponsoring Democratic party, Hillary Clinton, hundreds of politicians all over the world. This website is designed to let everyone take a look at restricted documents of George Soros’ Open Society Foundation and related organisations. It represents workplans, strategies, priorities and other activities of Soros. These documents shed light on one of the most influential network operating worldwide.

Here is a full list of Soros NGOs manipulating elections in all EU member states, complete with goals of the project, contact persons and grant amounts.

We would like to believe that the self-proclaimed Reformists are steps ahead, not just with this one, but in other arenas as well.

We can help bring down the Khazarian Mafia by defunding their Fake Healthcare System earning $4 trillion annually, and supporting the fake news media networks which promote terrorism and regime change around the world. Build your own Comprehensive Antiviral System, and start enjoying healthcare freedom today.