Another reason for the possible murder of the Russian Ambassador to the UN is the entry of the Russians in the NATO-disintegrated Libya.

Libya is now a failed state, and Russia is aiming to correct the mistakes committed against the Libyan people, just like it is now doing effectively in Syria.

The Russians have established contact with Khalifa Haftar, “a powerful warlord who controls not only the eastern part of the war-torn country, but also most of its vast oil deposits.”

The strongest manifestation of the developing alliance between Russia and Haftar’s portion of Libya was last month’s visit of Admiral Kuznetsov aircraft carrier, where the warlord climbed aboard to discuss about fighting terrorism (aka Khazarian Mafia).

“On January 11, 2017, Commander of the Libyan National Army Marshal Khalifa Belqasim Haftar paid a visit to the heavy aircraft-carrying cruiser Admiral Kuznetsov, traveling to its home base as part of the Northern Fleet’s air carrier group,” the statement said.

“After a brief tour of the ship, Marshal Khalifa Haftar held a video conference with Russian Defense Minister Sergei Shoigu to discuss urgent issues of the fight against international terrorist groups in the Middle East,” it said.

What this all means is that the world has awakened to the great monstrosity of all US-NATO interventions in the Middle East, and is now taking a more decisive stance against the real enemy of humanity with the right partner, i.e. Russia, another military superpower which has grown more assertive of its true place among nations on the planet.

Its policy of non-intervention into the domestic affairs of other countries seeking its valuable assistance is a stark contrast to the forced entry, via military and political invasion, of the West.

Russia About to Mend What West Left Broken in Libya 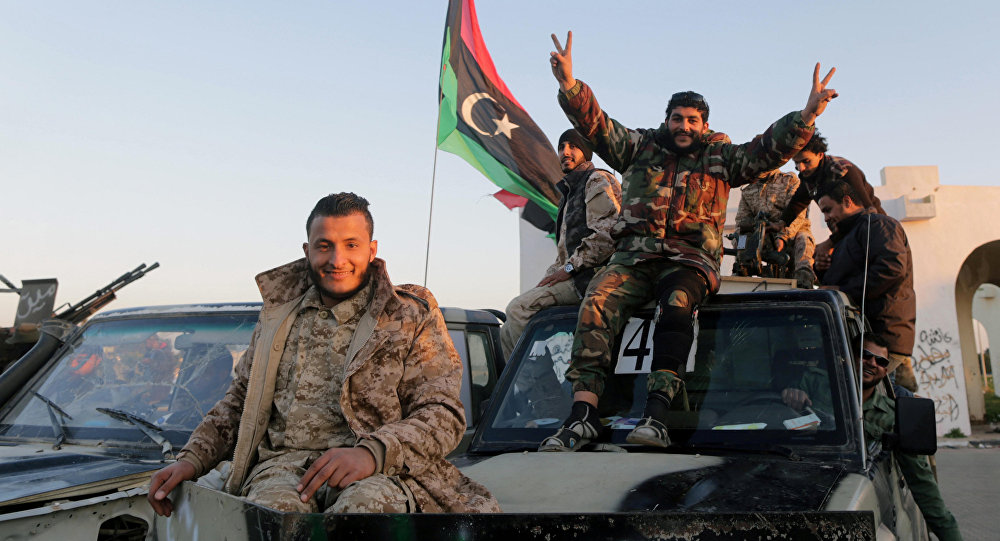 Six years after the fall of Muammar Gaddafi, Russia is steering towards a new foreign policy triumph over the West, Danish columnist Jacob Svendsen wrote in the newspaper Politiken.

Of late, Russia has strengthened its cooperation with Libyan marshal Khalifa Haftar, a powerful warlord who controls not only the eastern part of the war-torn country, but also most of its vast oil deposits. According to Svendsen, Khalifa Haftar may become part of a sustainable political solution in Libya, and Russia may establish a stronghold in the Mediterranean.

In recent weeks, the 73-year-old North African marshal’s favor has become the goal of a fast-paced diplomatic race, Svendsven wrote. The EU’s goal is to get Haftar, who has admittedly accumulated great powers, to come to terms with the weak UN-backed provisional government in Tripoli (GNA), which currently only controls a minor part of the country. Unlike Haftar, who speaks from a position of power, the rickety GNA is entirely dependent on a complex web of militias in western Libya for support.

“All the countries involved have recognized that Haftar must somehow be integrated in the power in Libya. Haftar, however, believes himself to stand a fair chance and sees no point in power-sharing,” Mattia Toaldo, an expert on Libya from the European Council on Foreign Affairs, told Politiken. “There are fears that he will become a new strongman, which are based on his repeated statements that Libya’s military must be independent of the political leadership. At the same time, he is quite popular among many Libyans who hope that his army succeeds in stopping the warring militias and the chaos they have created,” he added.

Last fall, Haftar paid two visits to Moscow, where he met with Russian Foreign Minister Sergei Lavrov. In early January, the Russian aircraft carrier Admiral Kuznetsov anchored next to Benghazi on the way from Syria. Haftar visited the ship and held a video conference with Russian Defense Minister Sergei Shoigu. Additionally, wounded soldiers from Haftar’s forces were flown to Russia for treatment.

According to Mattia Toaldo, Russia is adhering to a comprehensive geopolitical strategy of gaining influence in the Middle East and North Africa.

“Russia is moving into the position of a mediator in Libya and is showing that it is able to do what the West had failed to do since Gaddafi’s fall,” Mattia Toaldo said.

According to associate professor Peter Seeberg of the Southern Danish University, it is yet unclear whether the EU may succeed in making Haftar, who has gained control over most of Libya’s oil and gas fields and terminals, find a middle ground with the feeble central government.

“The question is whether he intends to, so, become part of a political solution or he’d rather become a sole leader, in the style of Gaddafi,” Peter Seeberg ventured.

Another condition to be considered is the role of the US in Libya under President Trump, whose people have had their contacts with Haftar and would not be thrilled with his increased cooperation with Russia.

For EU’s part, though, the main objectives are stopping the growing current of refugees who are crossing via the Mediterranean Sea, which last year alone claimed over 4,000 lives, and lowering the risk of terrorist attacks from Libya. In both cases, Haftar may prove irreplaceable.

Since the lynching of Muammar Gaddafi, Libya has become a failed state. Only a myriad of armed groups wield power. Libya is awash with arms and has reportedly become a safe haven for terrorists, including Daesh (ISIS/ISIL).

Libya was plundered of its gold that will be used to back up the establishment of a sovereign African currency, a brainchild of the late Muammar Qaddafi.