Donald Trump has added a new title to his presidential resumè – war profiteer, after he provoked North Korea with his “powerful armada,” and forced his THAAD installation into South Korea because the latter needs it right now more than anytime in the past.

The strongest motivation behind the forced missile defense installation is only beginning to unravel — that Seoul must pay a hefty price of $1 billion even though the US still owns and operates the installation… ultimately against China.

The same exact formula has been used effectively to bleed Japan since its surrender to the US in 1945.

When Japan decided not to submit to the extortion anymore in 2011, tsunami conveniently struck the country, while an Israeli security company threatened to blow up the remaining reactors with embedded nukes at the Fukushima nuclear facility.

The South Koreans have seen this scenario a long time ago, and they have expressed in more ways than one that the THAAD installation should not push through.

To Pay or Not to Pay: Seoul in Hot Water as Trump Wants

South Korean experts remained at odds over US President Donald Trump’s latest move: to get Seoul to pay one billion dollars for the deployment of elements of the US Terminal High Altitude Area Defense (THAAD) system in South Korea. 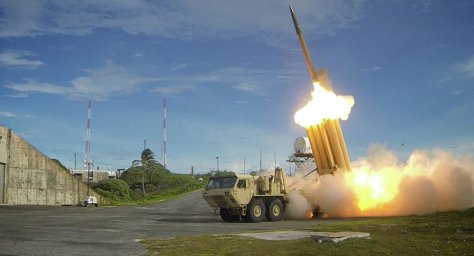 Earlier on Friday, US President Donald Trump said in an interview with Reuters that he wanted Seoul to pay for the one-billion-dollar US Terminal High Altitude Area Defense (THAAD) system stationed in South Korea to shield it from a possible missile attack by North Korea.

The THAAD agreement was reached by Seoul and Washington in July 2016, and March 2017 saw the beginning of the deployment of THAAD elements in South Korea.

“Considering Trump’s style and the fact that he has repeatedly made provocative statements, South Korea should wait and see how the American side will comment on its position on the matter in detail,” Lee told Sputnik Korea.

Who will pay for the billion-dollar #THAAD system? US, South Korea hold different opinions https://t.co/aUTJvCGiA3 pic.twitter.com/YhWQkca4An

He recalled that “THAAD is weaponry which is mainly owned and used by the US military”, saying that it will be senior US officials who will be placed in an “absurd position” due to Trump’s statement.

Cheong Seong-Chang, Director of the Department of Unification Strategy Studies from the Sejong Institute, for his part, said in an interview with Sputnik Korea that Trump plays into the hands of South Korea’s presidential candidate Moon Jae-in by urging Seoul to pay for THAAD.

“The new approach to the problem of THAAD opens up the opportunity of talks for South Korea, and creates a very beneficial situation for Moon Jae-in, who proposes resuming negotiations in a triple format, involving the US, South Korea and China. The possible talks on THAAD may help Moon Jae-in approach the issue not only from the point of view of security, but also in terms of economic interests,” Cheong said.

He also recalled that “there is a competition in the military sphere between the US and China, whereas there is no such rivalry between Seoul and Beijing, which is why South Korea has no reason to look into the strategic assets of China.”

“It will also be easier for China to accept the fact that in taking control of THAAD, South Korea does not pose a threat to Beijing’s strategic interests,” he pointed out.

“One billion dollars is a very big sum, but upon paying it we will be able to spend less on other types of weapons,” according to Cheong.

“We are already losing 12 billion dollars a year because of China’s retaliatory measures, and there could be an economic benefit,” he said, referring to Seoul’s possible move to pay for THAAD.

“The proposal met a positive reaction from Chinese experts, but there are big doubts that the US is really ready to sell THAAD to South Korea,” he added.

Kim Yeon-ho of the Minjoo Party of Korea in turn insisted that first of all, it is necessary to prove that South Korea really needs THAAD.

“First and foremost, we need to make sure whether THAAD really resolves the problem of protecting South Korea’s 50-million-strong population from North Korean missiles,” he said, urging the new South Korean government to complete the check-up of THAAD’s effectiveness.

“The government should not only consider the issue of legitimacy related to the deployment of THAAD, but also assess its feasibility given latest reports about the purchase of THAAD at the expense of the state budget,” Kim concluded.

Meanwhile, the South Korean Foreign Ministry’s representative said on Friday that Seoul has not received US demands to pay the costs of the THAAD system stationed in South Korea.

“A notification from the part of the United States [government] regarding this issue has not been obtained,” an official from the South Korean Foreign Ministry said, as quoted by the Yonhap news agency.

One thought on “From Dealmaker to Butcher, to War Profiteer Trump”