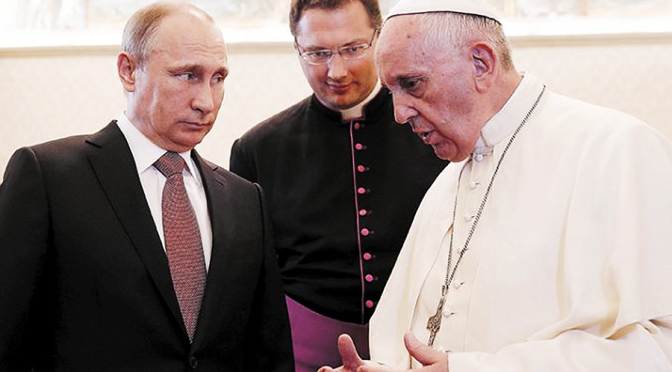 President Putin has slammed Pope Francis for “pushing a political ideology instead of running a church”, and warned that the leader of the Catholic Church “is not a man of God.”

“Pope Francis is using his platform to push a dangerous far-left political ideology on vulnerable people around the world, people who trust him because of his position,” Putin said.

He dreams of a world government and a global communist system of repression.

“As we have seen before in communist states, this system is not compatible with Christianity.”

“If you look at what he (the Pope) says it’s clear that he is not a man of God. At least not the Christian God. Not the God of the Bible,” Putin said at the Naval Cathedral of St. Nicholas in Kronstadt.

“He dreams of a world government and a global communist system of repression.

“As we have seen before in communist states, this system is not compatible with Christianity.”

The pope has become increasingly brazen this year in pushing the globalist agenda and far-left talking points upon the masses. Earlier this year he called for a global central bank and financial authority, and more recently he said “Americans need to be ruled by a world government as soon as possible for their own good.”

Pope Francis’s idea that Americans would be better off under a world government doesn’t stop there. The radical leftist pontiff also went on record stating that Europe should become one country under one government.

He is also on record calling for a China-style one child policy for Western nations, as well as telling a congregation in Rome that having a personal relationship with Jesus is “dangerous and harmful.”

While Putin is a practicing Christian, he is not a Roman Catholic, and the pope is not his leader. According to his recent statements, President Putin does not even consider Pope Francis to be Christian.

The Russian president is rarely openly critical of foreign leaders, instead preferring to use diplomacy to win people over to his side. However notorious globalists including George Soros, Jacob Rothschild and Bill Gates have received tongue lashings before, and now Pope Francis has joined their company.

Pope Francis is trying to lay the groundwork for a global communist government. President Putin is wise to his ruse and has called him out on it. It’s time for more world leaders to tell the pope to stay in his own lane.