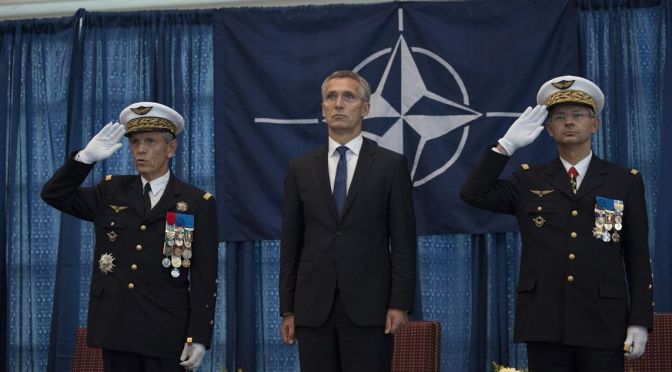 The rift between the neocon war hawks and genuine defenders of national sovereignty became ever clearer this week in the wake of Russia’s decision to put their body in front of the firing squad aiming at Venezuela two weeks ago.

Contrary to the incompetent analysis that Russia’s motive to send military planes and personnel to Venezuela is purely based on an “anti-American power play” or “motivated by its twenty billion dollars of investment in Venezuela”, the truth goes much deeper.

With Putin’s intervention into Syria in 2015, Russia clearly expressed an understanding that the era of regime change wars had to end if a world worth living in would be created. In this light, Russia’s strategic partnership with China and the Belt and Road Initiative cannot be understood from the perspective of a Hobbesian geopolitician who can only see the world through a distorted lens of materialism. This alliance is rather the foundation for a new international “operating system” founded on long term development, and mutual collaboration of all players. It’s another paradigm completely.

Donald Trump, now largely liberated by the crippling weight of the now-defunct Mueller investigation, has resisted war hawks both within America as well as internationally for over two years who are now calling for the overthrow of Maduro- even at risk of waging World War III.

Exemplifying this absurd view was CNN’s imperial mouthpiece Fareed Zakaria – who launched into a scathing attack on March 31st saying “The real puzzle remains: Why has Trump been unwilling to confront Putin in any way on any issue? And will Venezuela be the moment when Trump finally ends his appeasement?” (Apparently the new qualification for proving oneself to not be a puppet of Russia is to be willing to launch World War III.)

This psychotic line from the “nominal” American left has converged on neocon voices on the right reflected by American Security Advisor John Bolton’s threat to Russia’s military presence in Venezuela as he remarked last week that “we will consider such provocative actions as a direct threat to international peace and security in the region.” Bolton was joined by Mike Pence who stated on April 3 that America would support Venezuela until “it is free from the Maduro regime.”

In spite of the fact that Russia’s intervention into Venezuela has both stopped a violent regime change and saved countless lives, on April 4th NATO President Jens Stoltenberg was brought into the US Congress to give a desperate speech calling for a renewed commitment to resist the threat of Russia and renew the collapsing NATO-US alliance. After alluding to Russia’s annexation of Crimea as akin to Hitler’s takeover of Poland, Stoltenberg stated:

“We see a pattern of Russian behavior- Including a massive military build-up from the Arctic to the Mediterranean and from the Black Sea to the Baltic- the use of a military-grade nerve agent in the United Kingdom- Support for Assad’s murderous regime in Syria- Consistent cyber-attacks on NATO Allies and partners, targeting everything from Parliaments to power grids- Sophisticated disinformation campaigns- And attempts to interfere in democracy itself.”

It is no secret that after having met Trump the day before, Stoltenberg was expressing a widespread fear that NATO’s very existence is actually under threat.

Trump’s Call for Peace with Russia and China

Already having spoken on record that he sees NATO’s existence as obsolete, Trump intervened on NATO’s anti-Russian (and anti-Chinese) policy the day prior by stating: “I hope that it’s not going to be a security threat. I hope we have a good relationship with Russia, and with, by the way, China and everybody else. The fact that we have NATO, and NATO is a lot stronger since I’ve been President… But I think that we will get along with Russia. I do believe that.” On April 4th Trump stated his belief that “an epic trade deal with China” was imminent.

Trump’s reference to China was especially important for two reasons:

1) This month will see the second Belt and Road Conference in Beijing with a large representation from the USA which will hopefully make strides towards ending the trade war. Trump has already spoken in favor of China’s economic development capacities on several occasions since his 12 day State-Plus visit to China in 2017.

2) Representing the war faction, Secretary of State Pompeo and National Security Advisor John Bolton have both recently threatened China in the last few days with Pompeo dubbing the Belt and Road Initiative a strategic threat on March 29 and Bolton inflaming China-Taiwan tension on March 31 saying: “Chinese military provocation won’t win any hearts or minds in Taiwan. But they will strengthen the resolve of people everywhere who value democracy. The Taiwan Relations Act and our commitment are clear.”

The point to be emphasized is that the tension arising over Venezuela, Syria, Ukraine, Taiwan and elsewhere are merely predicates in a much larger great game. This “game” is being defined by two opposing paradigms of global relations- but only one of those paradigms is compatible with the survival of the human race. Thus far Trump has played an intelligent game paying lip service to fanatic hawks on all sides while keeping America out of new wars, but no one should forget that wild animals are their most dangerous when afraid and injured. The international oligarchy controlling the Deep State is both very wounded and very afraid that their days are numbered, so while hope in a new paradigm of cooperation should be kept high- complacency could yet prove fatal.

Matthew J.L. Ehret is a journalist, lecturer and founder of the Canadian Patriot Review.