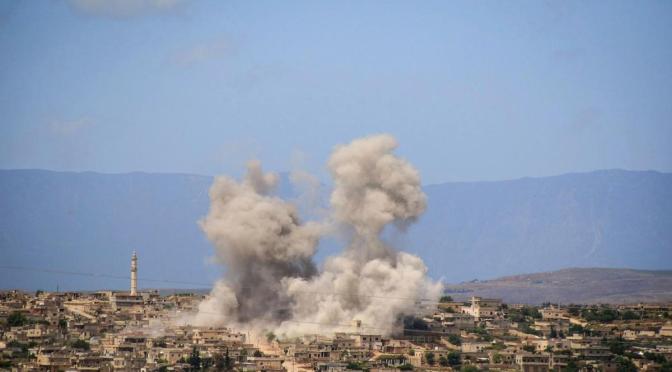 Not too long ago, the Israel Air Force was caught hiding behind a Russian surveillance plane operating outside the coastline of Syria to provoke an aerial defensive response from the Syrian Surface-to-Air Missile System [SAMS] that eventually killed all 20+ Russian personnel on board.

The idea is to pit the Russians against its ally Syria, a classic false flag operation that the Zionists are known for worldwide. The North never forgets, of course.

The First of Many Cauldrons Form in the Middle East

The Syrian Arab Army with Russian air support not only retook the important town of Khan Sheikoun in Syria recently, it did so in classic Russian military style, encircling their enemies and cutting off their retreat.

In Russian military parlance this is known as a cauldron.

It will be the first of many such cauldrons the SAA and Russia complete as they battle their way across Idlib and retake the province, now seven years under control by Al-Qaeda linked militants who change their names and allegiances like most people change their underwear.

But the real cauldron is forming not in Syria but in Israel.

Israel’s hardline expansionists, led by Prime Minister Benjamin Netanyahu, finally have a US President completely committed to their side in Donald Trump. Trump has altered the US policy of destroying Syria to destabilize Russia and keep Central Asia chaotic into an explicitly MIGA policy – Make Israel Great Again.

Trump has tipped the balance in Washington from just sowing chaos to thwart longer-term integration plans of Russia, China and Iran into one in which Israel would finally get its wish to rule over a fractious and subjugated Middle East.

With every victory by the SAA Tiger Forces and Russian air force in Syria that policy has slipped away inch by inch. The stronger Bashar al-Assad’s rule in Syria becomes, the more the country is rebuilt and the American/Israeli/Saudi/British support for Islamic extremists known in western media as ‘moderate rebels’ becomes common knowledge the more pressure mounts on their secondary allies.

These were Qatar, Turkey, the UAE, France and Germany.

To one extent or the other, over the past four years since Russia moved into Syria, openly defying the US, all of those countries have pulled back their support for the regime change operation in Syria.

The last holdout is Turkey who, under President Recep Tayyip Erdogan, continue to play the two factions off each other to wheedle what was originally promised to him – Idlib, Aleppo and Manbij – out of the ensuing chaos.

Erdogan’s mendacity was on full display this week when he cut a security deal with the US to occupy land east of the Euphrates River while at the same time tried to use the deal he cut with Vladimir Putin for a demilitarized zone around Idlib to resupply pet militants about to be encircled by SAA forces.

Russian air support bombing the resupply convoy was a stern message to Erdogan that he is not setting the tempo anymore in Syria and his time is up. Time to choose sides or be allowed to wither on the vine.

Russia would prefer Erdogan to stay in power in Turkey, but he has to balance his expansionist goals vis a vis Syria with the realpolitik of his situation, which is that without Chinese and Russia economic support Turkey collapses.

The battle for Idlib will likely be less bloody than was originally projected because Erdogan will have to abandon his dreams of it and settle for rupturing the friendship between the Kurds and the US, which is the existential threat to Turkey’s future.

So, get ready for a replay of 2016-17 in the run up to the liberation of Aleppo. Systematic dismantling of the Islamist forces in Idlib will occur now that Khan Sheikoun is in government hands. Turkey will not risk open warfare with Russia over this. Erdogan’s forces are already over-committed around the region.

Syria forms the Western part of the cauldron around Israel. Once Idlib is consolidated then the US base near the border crossing at Al-Tanf comes into focus.

The Iraqi government is furious with Israel for bombing an ammunition depot in Baghdad recently and declared a no-fly zone over the country. Israel understands how important the Shi’a militia, known locally as the Popular Mobilization Units, are to securing Iraq’s independence from de facto US control.

And with Trump refusing the invitation by his advisors, Israel and likely British intelligence, to begin open warfare with Iran, Israel is feeling especially vulnerable given how quickly pieces are falling into place to link Iran, Iraq and Syria.

Iran then unveils its new anti-missile system publicly, the Bravar 373, which boasts better performance than the Russian S-300 with stealth detection capabilities. Not only does Iran enter the global arms sale business but it also made an explicit threat to Israel that its days of sending its planes around the region bombing everything it doesn’t like will be over soon.

Israel has to maintain its air force has control of the skies around the Middle East and can openly attack targets at will. This helps the propaganda war here in the US to win more support within the obviously captured House and Senate Foreign Relations Committees as well as drum up support back home.

But it’s an illusion. The cauldron is tightening. And with each incident like the last one the stench of desperation grows stronger.

The Saudis have lost in Yemen. The Houthis have survived the onslaught and Iran’s drones give them the capability to strike whenever and wherever they want, threatening Saudi oil production.

Iraq has reopened the Albukamal border crossing between it and Syria for the first time in seven years. And Tehran is working on improving highway connections between Iran and Syria, to facilitate trade. This leads to terrestrially breaking down Trump’s sanctions/embargoes on Iran and Syria.

Overland supplies from both Iran and Iraq can commence from there now. And US prohibitions on rebuilding Syria have zero support internationally.

But the bigger news is that Tehran is also proposing to Syria access to pipelines to secure its future energy supplies.

According to the source, two options for the pipeline are on the table – a new 1,000 km pipeline running through Iraq into Syria, or repairs by the Iranian side to the Kirkuk-Baniyas pipeline, an 800 km pipeline first commissioned in the early 1950s stretching from the northern Iraqi city to Syria, but whose operation was stopped in 1982 during the Iran-Iraq War, and which was severely damaged by airstrikes during the 2003 US invasion of Iraq.

It’s estimated that the overall capacity of that pipeline would be about 1.25 million barrels of oil per day, which could theoretically account for nearly half of the country’s pre-sanctions crude oil exports.

Plans like this wouldn’t be on the table or discussed openly if there wasn’t confidence of them coming to fruition. We’re at the negotiating stage of these pipelines between Iraq and Iran. The US and Israel simply won’t be a factor now since Israel has thoroughly alienated the current Iraqi government.

So, the cauldron around Israel is forming. With the Saudis in deep trouble, Egypt refusing to go along with any of Trump’s plans – Arab NATO, the Kushner Deal of the Century – the game board has fundamentally shifted against them.

Netanyahu bet the farm on Trump and Trump failed to deliver. They were countered at every turn by patient and scrupulous opponents who read the board better and didn’t respond muscularly to repeated provocations. They let events come to them and waited for the moment of over-commitment.

Now the counter attack will commence, I suspect, with brutal precision.

Tom Luongo is an independent political and economic analyst based in North Florida, USA .

5 thoughts on “Cauldrons Forming vs. Zionists in the Middle East”