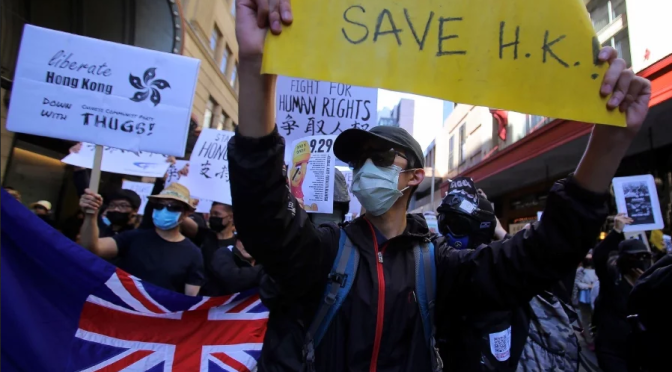 Clearly, some young people in Hong Kong have adopted British culture – after the handover to China of their special province. They do not know the history of their country and what they owe to the Peoples’ Republic of China. For their great grandparents, London had brought only misery and desolation, causing the collapse of the Middle Kingdom.

Hundreds of young Chinese, in front of the British Consulate in Hong Kong, sing the God Save the Queen and shout “Great Britain Saves Hong Kong”, a rally call in London by 130 parliamentarians who ask that British citizenship be given to residents of the former colony. In this way, Britain is emerging in world public opinion, particularly among young people, as a guarantor of legality and human rights. To do this, History is erased.

It is therefore necessary, before any other consideration, to know the historical episodes which, in the first half of the 19th century, brought the Chinese territory of Hong Kong under British rule.

To penetrate China, then ruled by the Qing dynasty, Britain resorted to the distribution of opium, which it shipped by sea from India where it held the monopoly. The drug market spread rapidly in the country, causing serious economic, physical, moral and social damage that provoked the reaction of the Chinese authorities. But when they confiscated stored opium in Canton and burned it, the British troops occupied this city and other coastal cities with the first Opium War, forcing China to sign the Treaty of Nanjing in 1842.

In Article 3 it states: “As it is obviously necessary and desirable for British subjects to have ports for their ships and their stores, China will forever cede the island of Hong Kong to Her Majesty the Queen of Great Britain. and her heirs “. In Article 6 the Treaty stipulates: “Since Her Britannic Majesty’s Government was obliged to send an expeditionary force to obtain compensation for the damage caused by the Chinese authorities’ violent and unjust procedure, China agrees to pay to Her British Majesty the sum of $ 12 million for expenses incurred.

The Nanking Treaty is the first of the unequal treaties by which the European powers (Great Britain, Germany, France, Belgium, Austria and Italy), Tsarist Russia, Japan and the United States secured in China, by the force of arms, a series of privileges: the cession of Hong Kong to Great Britain in 1843, the sharp reduction of taxes on foreign goods (at a time when European governments were erecting customs barriers to protect their industries), the opening of the main ports to foreign vessels and the right to have urban areas under their own administration (“concessions”) exempted from Chinese authority.

In 1898 Great Britain annexed the Kowloon Peninsula in Hong Kong and the so-called News Territories, conceded by China to be “rented” for 99 years.

The widespread dissatisfaction with these impositions exploded towards the end of the 19th century in a popular revolt – that of the Boxers – against which intervened an international expeditionary force of 16,000 men under British command, in which Italy also participated (and France, NdT).

Landed in Tianjin (T’ien Tsin) in August 1900, the force sacked Beijing and other cities, destroying many villages and massacring the population. Later, Britain took control of Tibet in 1903, while Czarist Russia and Japan shared Manchuria in 1907.

In China, reduced to a colonial or semi-colonial state, Hong Kong became the main door of exchange based on the plunder of resources and slave labour exploitation of the population. A huge mass of Chinese are forced to emigrate mainly to the United States, Australia and South-East Asia, where they are subjected to similar conditions of exploitation and discrimination.

A question arises spontaneously: Which history books are young people who ask Britain to “save Hong Kong” studying?

14 thoughts on “Hong Kong, the Treaty of Nanjing Returns”