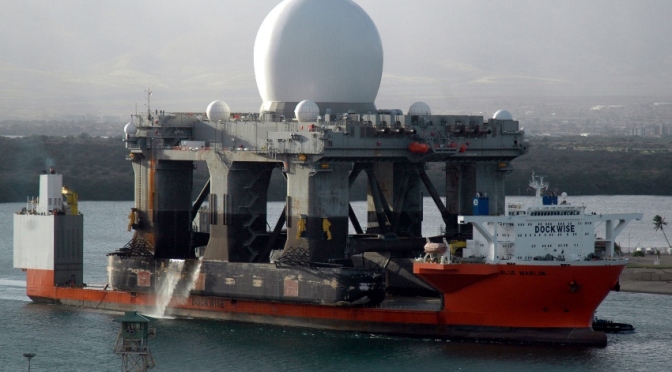 A little more than a year ago, central Philippines was attacked with the strongest typhoon in recorded history. Now, they are using the weather weapon again, same strength, and same path.

Local media are already hyping the masses that what’s coming is another category 5 typhoon in sync with the Cabalist Star ‘n Stripes website. These projections were done too early, even without the availability of pertinent data to support said forecast other than their possible knowledge access to HAARP activities.

10:30 p.m. Tuesday, Dec. 2, Philippines time: Thus far, the northwest Pacific tropical cyclone season has seen just 22 numbered storms, about 10 below average per year. But seven of those numbered storms strengthened into super typhoons, and we could have an eighth one on the way, if Tropical Storm Hagupit remains true to its Joint Typhoon Warning Center projection.

Hagupit is forecast to peak at 150-mph sustained winds and 184-mph gusts at its center, a strong Category 5-equivalent typhoon, as it approaches the central islands of the Philipipines. As if the islands didn’t have enough trouble last year with Super Typhoon Haiyan last November, Hagupit is on course to head toward that same general area, although it’s still at least six days away from landfall and anything can happen.

No U.S. bases appear to be in any danger at this point; Hagupit is forecast to rumble some 460 miles south of Naval Station Guam at about 3 a.m. Wednesday and continue on a west-northwest coast. Clearly in harm’s way is the tiny island of Yap, southwest of Guam, which is forecast to take a near-direct hit at 8 p.m. Wednesday local time there.

PST is continuing to watch Hagupit, which – ironically – is a Tagalog word which stands for lashing or flogging.

“At 4:00 am today, the eye of Typhoon “RUBY” was located based on all available data at 942 km East Northeast of Hinatuan, Surigao del Sur or 1,023 km East of Surigao City (9.4?N, 134.8?E), with maximum sustained winds of 175 kph near the center and gustiness of up to 210 kph. It is forecast to move West Northwest at 25 kph. Northeast monsoon affecting Northern Luzon,” PAGASA said Thursday in its 5:00 a.m. bulletin. PAGASA

He added Ruby is likely to linger in the PAR until Tuesday next week.

It packed maximum sustained winds of 175 kph near the center and gustiness of up to 210 kph, and is forecast to move west-northwest at 25 kph.

PAGASA said Metro Manila and the rest of the country will be partly cloudy to cloudy with isolated rain showers or thunderstorms.

Meanwhile, PAGASA said moderate to strong winds from the northeast will prevail over Luzon and eastern section of Visayas and of Mindanao and the coastal waters along these areas will be moderate to rough.

“Ang estimate namin hanggang four meters,” he said when asked how high the waves could get.

He also said a gale warning is up over the eastern seaboard of the country.

Hagupit is forecast to move toward the Philippines over the next couple of days before either hitting or grazing the island nation.(Photo: AccuWeather)

Super Typhoon Hagupit — on track to be the world’s most powerful storm this year — is forecast to hit or graze the Philippines by the weekend.

Hagupit strengthened into a typhoon Tuesday and continued to strengthen Wednesday, with sustained winds of 150 mph, the Joint Typhoon Warning Center said.

That is equivalent to a Category 4 hurricane. A typhoon is the same type of storm as a hurricane but is called a typhoon in the western Pacific Ocean.

The storm was about 800 miles east of the Philippines and could be near the island nation by Saturday.

The Philippine government on Wednesday sent food and medical supplies to central provinces in the path of Hagupit, GMA News reported. Residents of coastal villages and landslide-prone communities were told to move to government-designated evacuation areas.

“If the storm takes the track into the Philippines, the impacts will be potentially very severe with widespread flooding, damaging winds, mudslides, storm surge and pounding surf,” AccuWeather meteorologist Anthony Sagliani said.

A continued west-northwest track would place the central Philippines in the threat zone, including areas still recovering from deadly Super Typhoon Haiyan 13 months ago, the most intense tropical cyclone at landfall in history, the Weather Channel said.

Conceivable to say that #Hagupit/#RubyPH may be cat 5 at/near landfall over Philippines. JTWC comes around. pic.twitter.com/h3K69yBbFR 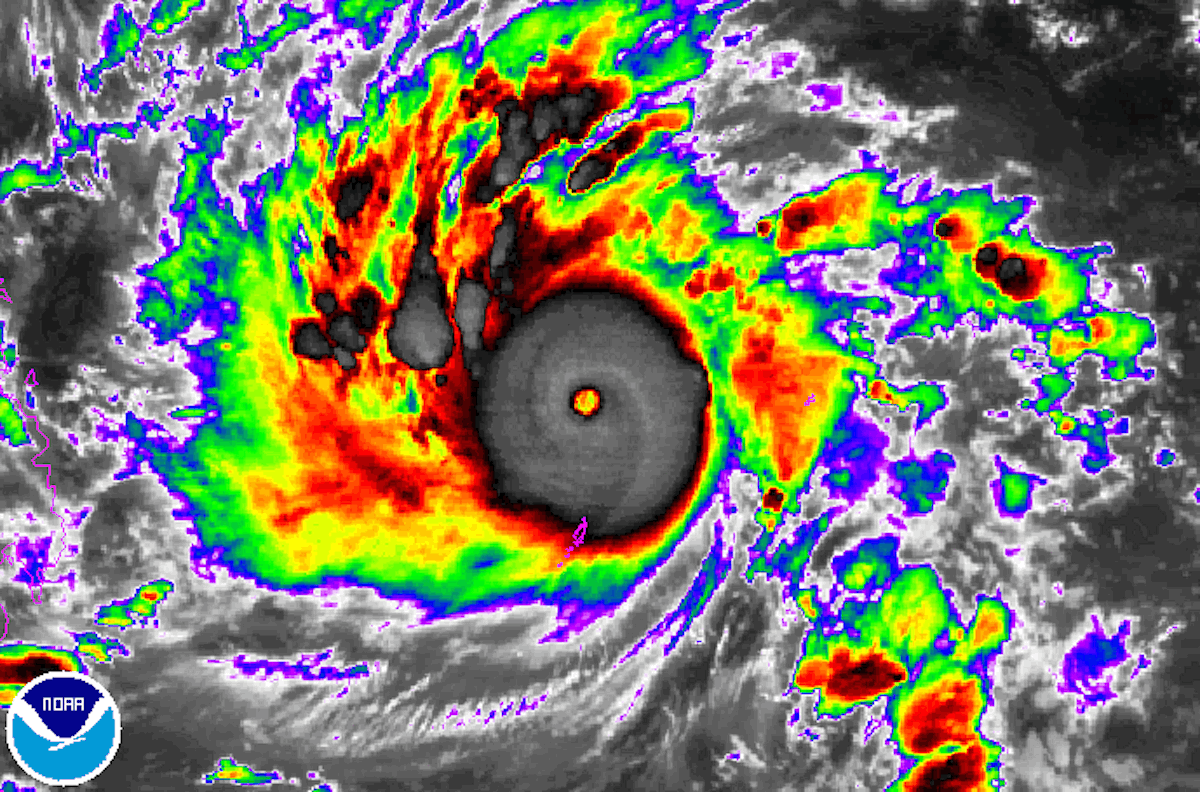 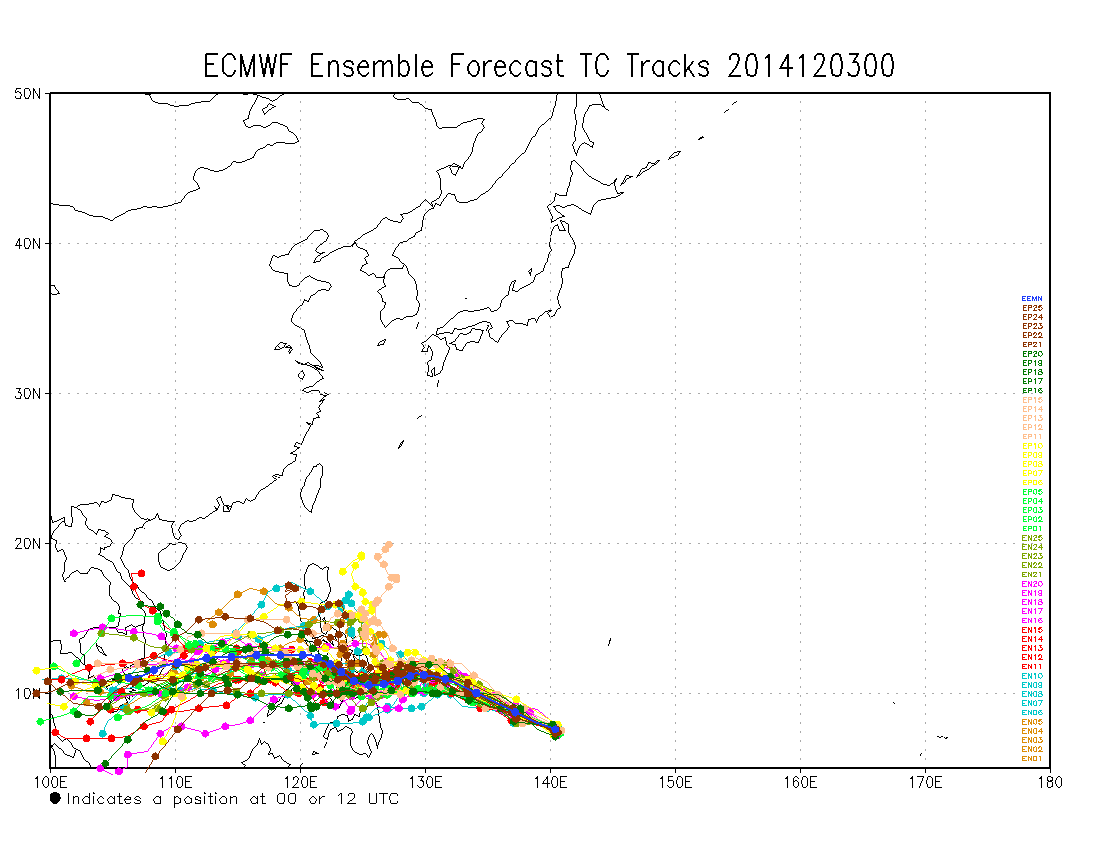 Not much doubt that Typhoon #Hagupit will be Cat 5 Super … not quite Haiyan yet. pic.twitter.com/HNvk9T4Amd