The Trump government was said to be an important part of the global effort to neutralize the unwarranted power of the Deep State. That is an absolute bullshit.

The 2019 edition of the exclusive Bilderberg Meeting will take place at the Hotel Montreux Palace in the Swiss town of Montreux from Thursday to Sunday, 30 May – 2 June 2019, with Trump’s close adviser Jared Kushner and Deep State Secretary Mike Pompeo as some of the confirmed attendees.

The Swiss paper reports that Pompeo is set to sit down with Ueli Maurer. The two are tipped to discuss the situation in Iran, where Switzerland represents US interests. 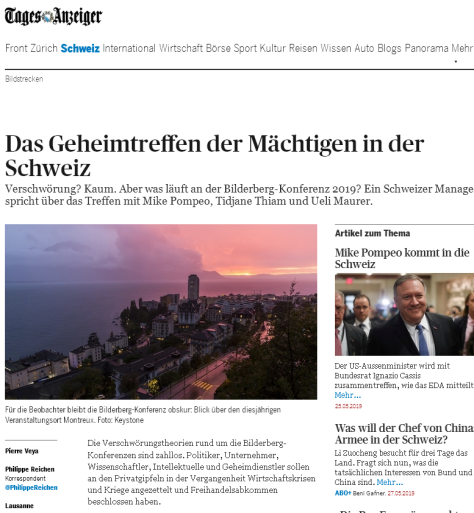 According to Swiss daily Tages Anzeiger, US Secretary of State Mike Pompeo will also be among the attendees, although he is not on the official guest list on the Bilderberg website.

The yearly Bilderberg talk-fest, which dates back to 1954, features a guest list of around 130 people from Europe and North America including everyone from royals to business tycoons and academics.

A highly secretive affair with a fixed agenda of preserving their privileged positions in society, the Bilderberg Meeting has been the most visible forum by which the Western globalists formulate their unified strategies and actions, which ensures and maintain their grip on their population, amidst an advancing multipolar world.

Declared topics up for discussion this year include climate change and sustainability, Brexit, China, Russia, the future of capitalism and the weaponization of social media.

However, it’s very clear that one of their plans will be the mass conditioning of the mind for an alien invasion, as the ultimate false flag distraction to keep themselves in power.

In contrast, most Asian-based fora prioritize global terrorism as the most pressing issue needing the utmost cooperation among members of the Alliance. Global terrorism, of course, is just a code phrase for CIA/MOSSAD terror operations against them.

According to the official Bilderberg website, discussions are held under the Chatham House Rule, which means participants can use any information they receive during the meeting but cannot reveal its source.

So, if you think that the Trump’s administration is not interested in preserving the Deep Swamp in DC, you have a problem, and setting yourself on fire is not the solution. Quite the opposite, the Deep Swamp should be the one burning instead.

Here is the full list of attendees to this year’s Bilderberg Meeting:

This year will be the second time the Bilderberg meeting has been held in Switzerland. In 2011, it was held in St Moritz, in the country’s southeast.

Eliminate the threat of cancer and cripple the Deep State organized criminal cabal at the same time by boycotting Big Pharma for good.

3 thoughts on “Pompeo, Jared Kushner Among Bilderberg Attendees this Year”